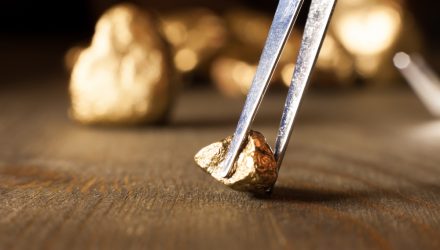 The Biden Administration, fresh off the $1.9 trillion stimulus bill, is already eyeing another $3 trillion package. All that government spending could stoke inflation, putting mining assets such as the Sprott Junior Gold Miners ETF (NYSEArca: SGDJ) in focus.

“The factor-based Index methodology seeks to emphasize companies with the strongest relative revenue growth and price momentum, two factors that historically have been strong predictors of long-term stock performance for junior gold miners,” according to Sprott.

“The recent $1.9 trillion stimulus bill will add to the wave of unprecedented money printing that we have seen in the United States,” according to Seeking Alpha. “This could very easily lead to inflation once the economy reopens and people begin spending their money.”

The small cap SGDJ uses a momentum-based strategy that “emphasizes small- to mid-sized gold producers with the highest revenue growth and exploration companies with the strongest stock price momentum,” according to the issuer.

“One of the biggest reasons why every investor should hold a position in gold is because of the protection that it provides against inflation. Economists generally define inflation as a general rise in prices in an economy but it’s caused when the money supply grows faster than the production of goods and services in the economy,” concludes Seeking Alpha.