You are at:Home»Gold & Silver Investing Channel»Looking to Buy on the Dip? Consider Junior Miners, ‘SGDJ’ 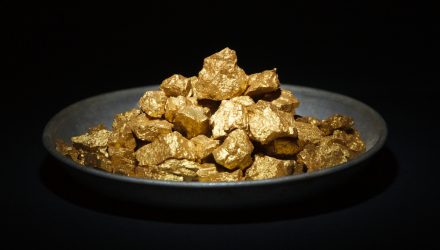 Looking to Buy on the Dip? Consider Junior Miners, ‘SGDJ’

Gold prices hit a rough patch in the first quarter, but that’s not stopping junior miners from pushing ahead with their own projects, and that could work in the long-term favor of the Sprott Junior Gold Miners ETF (NYSEArca: SGDJ).

“Even though the gold price has fallen, junior gold miners are moving forward with numerous projects, many of which are fully funded for this year. RBC has met with several exploration-stage companies focusing on regional projects,” reports Michelle Jones for InvestorPlace.

“Pushing forward with more and more gold mining projects could be good or bad for the junior gold miners. On one hand, it could prepare them for a much higher gold price down the road. After all, it makes sense to mine while the price is lower to take advantage of a higher price later. However, if the gold price doesn’t rebound, junior gold miners could take a hit from all of these capital-intensive projects,” according to InvestorPlace.

“Many factors affect the gold price at any given time, and this year could bring some big changes to several of those factors. For example, gold often rises during times of inflation. It seems logical to expect some level of inflation in the wake of the large amounts of stimulus that have been pumped into the economy. However, some economists don’t expect significant inflation despite all the stimulus,” concludes InvestorPlace.