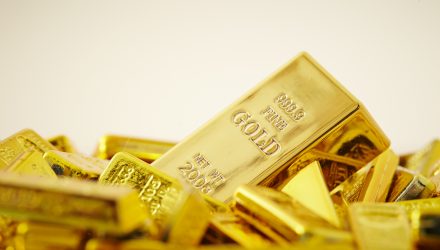 Gold ETFs May Still Have Opportunities to Shine

While the gold market may weaken in light of a rising interest rate environment, potential slowdowns in the economy may allow bullion-related exchange traded funds to strengthen in a more risk-off environment.

“Although the expected December rate hike is likely already priced into the market, the ramifications of tightening and the proposed tax overhaul could hamper the economy in the long-term,” Joe Foster, Portfolio Manager/Strategist for VanEck, and Imaru Casanova, Deputy Portfolio Manager for VanEck, said in a note. “We expect gold to continue to form a base with a longer-term view that increased financial risk deriving from a potentially weaker or slowing U.S. economy is possible.”

Foster pointed to historical trends where gold would weaken ahead of a rate hike announcement but swiftly rebound in the following months. For example, in the 7 trading-day period leading up to the December 2016 rate hike, gold prices dropped 2.4% while prices ended unchanged during the same period around the 2015 rate hike. In both instances, the weakness was followed by strong rallies over the first two months of the following year.

Looking beyond the short-term swings, VanEck believes the long-term effects will further support gold pricing. A tighter policy could end up pushing the U.S. economy toward the next recession. Furthermore, Foster argued that the greater fiscal deficits resulting form the U.S. tax reform could hinder the economy in the long run.

“We expect gold to continue to form a base, trading in the $1,200 to $1,350 per ounce range, with a longer-term view that increased financial risk deriving from a potentially weaker or slowing U.S. economy, as well as heightened global geopolitical risk and political struggles in Washington D.C., could drive gold much higher,” Foster said.