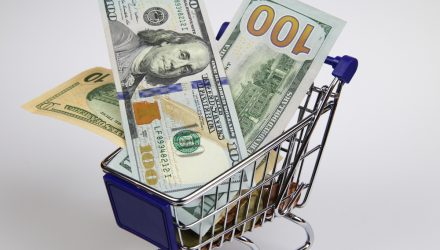 Rising interest rates and persistently high inflation could be a toxic brew when it comes to consumer spending. Throw in speculation of coming layoffs at a slew of major companies, and things could get even tighter on the discretionary spending front.

For investors, it’s critical to realize that consumer spending isn’t linear across income levels. Said another way, economic contraction isn’t pleasant, but some affluent consumers will continue spending. Not all consumer-related exchange traded funds are adequately levered to that theme, but the Goldman Sachs Future Consumer Equity ETF (GBUY) is.

GBUY isn’t a consumer cyclical ETF in the most traditional sense. In fact, that’s just the ETF’s second-largest sector allocation. However, the fund has substantial inroads to affluent consumers — something its more standard rivals lack.

“The upshot is that right now, it appears those at the top of the income spectrum are poised to keep spending, likely limiting the severity of any economic downturn. Nonetheless that spending may look different than it has in recent years,” reported Teresa Rivas for Barron’s.

GBUY, which turns a year old in November, is actively managed — a potentially favorable trait in an ETF category that’s largely dominated by passive products. Many GBUY rivals aren’t adequately exposed to the high-end consumer. Rather, they’re broad funds.

GBUY doesn’t lack for depth, but it does offer more exposure to affluent consumer spending trends. As an active fund, that exposure can be increased or trimmed as the managers see fit.

“LVMH Moët Hennessy Louis Vuitton (MC.France) delivered a robust second quarter, marked by stronger-than-expected double-digit sales increases and expanding margins, bolstered by price increases,” according to Barron’s. “Still, strength in the U.S. and Europe is more than compensating from its depressed Asia business, and LVMH has one of the highest returns on equity of its peers.”

The French luxury goods and spirits giant is GBUY’s third-largest holding at a weight of 4.6%. Conversely, the name doesn’t appear in many old guard consumer discretionary ETFs because it’s a foreign company.

Several other GBUY holdings also have leverage to affluent consumers, potentially providing some buffer against a material pullback in broader consumer discretionary spending.

“Ultimately, economic risks are rising for the second half of 2022, and factors beyond consumers’ control, from interest rates to housing starts, will play a role in their ability to keep spending at a time when inflation remains at historic highs. That’s created a perfect storm among retail stocks, which have been understandably battered,” concluded Barron’s.