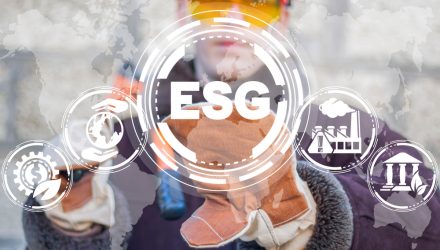 As climate change proves to be as much a financial risk as an existential one, investors have begun to flock toward environmental, social, and governance (ESG) ETFs as never before. The definition of what constitutes “ESG,” however, has begun to evolve. Previous iterations of ESG ETFs were primarily exclusionary funds that simply excised the worst-offender stocks. But can active management perhaps provide a better way?

Steve Sachs, managing director and global head of ETF capital markets, Goldman Sachs: Like you would expect from any large global investment bank, we [at Goldman Sachs] are doing a number of things in this area that range the traditional “E,” “S,” and “G” aspects, as well as understanding companies’ impact in sustainability. Some people would consider that part of the “E,” “S,” and “G,” but many folks consider sustainability to be separate and distinct.

An example of that: Last year, our CEO, David Solomon, announced an initiative that Goldman Sachs would invest $750 billion in sustainable investing initiatives. That can apply to a broad range of things. For example: Goldman Sachs invested alongside its clients in GSFP; that’s not seed capital, it’s a long-term investment in the strategy as part of our overall commitment to invest in sustainable investments. Another example of a fund under the ESG umbrella is the Goldman Sachs JUST U.S. Large Cap Equity ETF (JUST).

Broadly speaking, from a Goldman Sachs Asset Management perspective, so much of what we do in our investment teams and our investment strategies is viewed through an ESG lens. That can mean different things in different parts of the business. It can be purely quantitative — so, when you think about aligning with certain prescriptive frameworks, like the Paris-aligned benchmarks. Or it can be qualitative, such as our active portfolio managers selecting individual securities, looking through that ESG lens as they do their fundamental evaluations.

Crigger: Goldman Sachs tries to take a more holistic approach toward evaluating ESG criteria, is that it?

Sachs: Yes, in two ways. One, and as discussed, all the portfolio managers within our fundamental equity team — who are the folks who manage GSFP — are viewing much of what they do through that ESG framework. They’re looking at various ESG scores that different services and agencies calculate, whether it’s MSCI, Bloomberg, or standards set in the Paris Climate Agreement. But they’re not necessarily using it as a direct screening tool. Various companies within Future Planet may have varying ESG scores, because what really matters most in GSFP is investing in companies looking to solve for “E,” or the environmental problem, in ESG. We believe that the companies that are looking to build out solutions for those problems will be long term drivers of structural growth in the marketplace. So, clean tech, clean water, etc.

Crigger: Water is one of those investment themes that’s perennially overlooked!

Sachs: I agree. It’s a topic that, personally, I am super interested in. One can make the argument that we’ll face a wide water crisis in this country, the U.S., some time in our lifetimes. But the actual reality is that we’re facing that already. If you live west of the Mississippi River, you have experienced an ongoing water crisis for the better part of a decade, whether it be water restrictions, various droughts, and so on. But obviously it’s a significant issue globally as well. So I think that’s one great example of what GSFP captures exposure to in its strategy.

Crigger: One thing I think is interesting is that many ESG ETFs start with exclusionary screens. But not GSFP. There aren’t any exclusionary screens in your prospectus language. Instead, you’re starting from five themes, then giving your managers the flexibility to invest as they see fit.

Sachs: Absolutely. It starts with, first and foremost: What do we believe in? We believe there are certain thematic exposures within the investment world that will drive secular growth over not just the next couple of quarters or years, but the next couple of decades. And we believe it will change the state of the planet, as it relates to the companies, the industries, the businesses driving that growth.

What’s the Facebook of 20 years from now? What is the Tesla of 20 years from now? What are those companies and industries that quite frankly may not have even existed 10 or 15 years ago? What are those ones in the future? That’s what we’re trying to capture, not just in GSFP, but also in the Goldman Sachs Innovate Equity ETF (GINN). In that fund, there are many broad-based themes encompassed in that global, all-cap approach. It’s similar to what we’re doing with GSFP. We drill into a few specific themes.

Secondly, with GSFP, instead of taking a rules-based quantitative approach, we take an active approach. That’s driven by the 85+ active portfolio managers, research analysts, and associates that we have around the globe in our Fundamental Equity Business at Goldman Sachs Asset Management. This is what they do for a living. This is what their active management focus is. They’re out there meeting with management teams, looking for the best companies within the best industries within the best sectors that are going to drive this structural growth over the next couple of decades.

Crigger: You mentioned JUST; JUST is index-based. So what is it about ESG or sustainability investing that benefits from an active approach?

Sachs: The overarching problem with ESG investing is that ESG is very personal. What you believe from an ESG perspective can mean slightly different things to different people. You might not care about the “S” or the “G,” but be super focused on the “E.” And so on.

On top of that, the traditional, historical approach has been the exclusionary route. Which is okay. It’s easy to measure, it’s easier to construct. If you can agree upon things that you don’t want to invest in, then that’s a good starting point. The problem with that, though, is that some companies and industries that folks might agree on are not necessarily the best industries from either an “E” or an “S” perspective tend to be really good businesses from a profitability perspective. So trying to marry that intersection between generating the most alpha versus doing what is “right” — well, that’s a tough intersection.

So that’s the reason that we’ve taken multiple approaches to ESG. And it aligns with our total product suite. So take what we’ve done with JUST, which we started in partnership with Just Capital, a non-profit organization that focuses on capturing what the average American thinks is “just” behavior from corporate America. They assess that by polling the American public annually to understand which kitchen table issues they care about, then couple that with proactive outreach to corporate America. The founding mission of Just Capital is to change corporate behavior from the inside out. So they take their data directly to the company boards to help them understand how they rank and where are their areas for improvement.

You can imagine, those kitchen table issues are probably exactly what you were thinking. Does the company pay a living wage? Do they make good products? Do they treat their customers well? Do they treat the environment well? Do they have good oversight and governance? Not surprisingly, companies that are doing right by their workers, making good products, doing right by their customers, and not poisoning the environment — guess what? They tend to have a much higher ROI than the rest of the universe.

Crigger: Funny how that works.

Sachs: Agreed! The nice thing about JUST, though, is that it’s not an exclusionary process. It’s based on, again, what the American public thinks. Not Goldman, not Just Capital. What the American public thinks about how a company should behave. Over the long term, higher-ranking companies produce higher shareholder value and greater returns. That’s a different approach than your quote unquote “traditional” exclusionary approach of not investing in certain industries and businesses.

So that’s really ultimately what we at Goldman Sachs are trying to do within the ETF space: We want to give the advisor community choice. Choice in how they think about implementing a particular strategy, choice in how they evaluate it relative to their client base. In particular, when you’re talking about ESG, everybody’s different and every advisor’s practice is different. We just want them to have options.

Crigger: How do Goldman’s ESG ETFs fit within a traditional portfolio? Are these part of a thematic sleeve, are they options to replace some beta exposure, or are they for something else entirely?

Sachs: That is a great question. It’s a question that we get most often from the advisor community. Where do I put this in my portfolio? And: How do I think about it relative to my client?

What I mean by that is that obviously, we’re all super in tune with the generational wealth transfer that’s already underway in this country. One of the other tricky aspects of ESG investing is it’s very personal from a generational perspective. I think about ESG investing vastly differently than my son does. It’s something that we don’t necessarily all completely have our heads wrapped around.

Advisors tell me every single day that the second and third generation of wealth thinks about ESG investing differently, as well as more often and more proactively, than the current generation of wealth. So I think the answer to your question is that this is going to change over time.

But when you think about GSFP, specifically, I think it’s more of a satellite approach. The highly concentrated portfolio — 50 to 60, names, all caps and global investor — are really focused in on those themes that we talked about. Things like clean energy, resource efficiency, clean water, things of that nature. But then when you think about JUST, that fund is much broader, you know? The Russell 1000 Index is the starting universe, making it much more of a core product.

It goes back to this: ETFs, like anything else, are a tool in the toolbox. You’re going to have to use tools to build the house, right? The same thing with a portfolio construction. Whether you use ETFs or other instruments, you’re going to end up incorporating multiple tools in order to build out that portfolio.