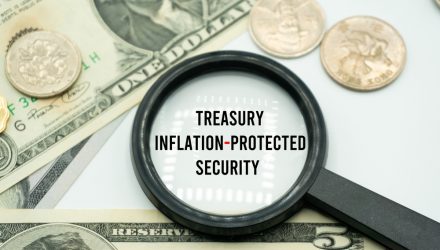 Protect Against Sky-High Inflation With This Unconventional TIPS Fund

Many investors and analysts fear that the Federal Reserve’s plan to fight inflation through aggressive rate hikes will push the U.S. economy into a recession. After the Fed implemented a 75-basis-point interest rate hike — its sharpest since 1994 — analysts at Goldman Sachs wrote in a note to clients that the risk of the economy falling into a recession this year doubled, projecting a 30% chance of a recession over the next 12 months, up from the firm’s prior forecast of 15%.

“The Fed has front-loaded rate hikes more aggressively, terminal rate expectations have risen, and financial conditions have tightened further and now imply a substantially larger drag on growth — somewhat more than we think is necessary,” the note said.

Even Fed Chairman Jerome Powell has admitted that “it’s certainly a possibility” that these rate hikes could push the economy towards a recession.

In an op-ed that appeared in the Wall Street Journal, Senator Elizabeth Warren (D-MA) argued that the Fed’s plan to aggressively raise rates is an ineffective means of fighting inflation that will cost jobs and won’t address the root causes of high prices.

“Inflation is a global phenomenon inflicting significant financial pain on families everywhere. Rising costs are an urgent problem, and interest rates play a key role in maintaining price stability,” wrote Warren. “But urgency is no excuse for doubling down on a dangerous treatment.”

Added Warren: “As with any illness, the right medicine starts with the right diagnosis. Unfortunately, the Fed has seized on aggressive rate hikes—a big dose of the only medicine at its disposal—even though they are largely ineffective against many of the underlying causes of this inflationary spike.”

Those looking to protect their portfolios against inflation may want to consider the Goldman Sachs Access Inflation Protected USD Bond ETF (GTIP). GTIP tracks an index of Treasury inflation-protected securities. The fund invests in a broad mix of fixed-rate, U.S. dollar-denominated sovereign bonds that have a minimum issue size of $5 billion and at least one year to maturity, according to VettaFi’s analyst report on the ETF.

But while other rules-based TIPS strategies buy only the newest issues, or “on-the-run” securities, which may increase demand and drive up the price, GTIP invests in “off-the-run” securities. Goldman Sachs helped develop an index designed to avoid any potential feeding frenzy by buying the less-popular off-the-run TIPS.