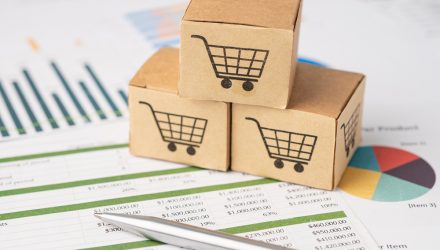 It probably isn’t surprising, but online retail sales set a blistering pace during the 2021 holiday season. Around the world, shoppers spent $1.4 trillion online during the holiday shopping season, with $257 billion of that spending occurring in the U.S.

That speaks to the long-term viability of the Goldman Sachs Future Consumer Equity ETF (GBUY). GBUY debuted in November in what amounts to good timing in terms of catching some support from consumer spending during the holidays.

The holidays are in the past, but some of the catalysts that sparked more online sales in 2021 are lingering into 2022, indicating that GBUY is a credible idea regardless of the time of year.

Another longer-ranging catalyst for GBUY is social commerce — the combination of online retail and social media.

“Social commerce’s role in consumers’ purchasing journey is becoming more relevant. During the holiday, 4% of global online sales via mobile devices were completed through a social media app, with 10% of mobile traffic coming from social media users,” according to Retail Diver.

By next year, a quarter of retail sales could happen outside of retailers’ web sites, mobile apps, and physical stores. Expanding social commerce requires platforms of various fashions, whether it’s Shopify (NYSE:SHOP) assisting sellers or social media companies providing venues. Those include Meta (NASDAQ:FB) and Snap (NYSE:SNAP). All three stocks are members of the GBUY portfolio.

To that point, China is already one of the world’s largest social commerce markets. GBUY gets in on that act, as 19.2% of its geographic exposure is directed to Asia ex-Japan.

Another interesting theme that emerged in retail last year is that brick-and-mortar retail stores rebounded and proved integral in setting the stage for more online transactions.

“Even in an increasingly digital environment, brick-and-mortar stores continue to play an important part this holiday. From generating to fulfilling demand, physical stores influenced 60% of global digital sales during the period,” according to Retail Dive.

Some GBUY holdings are tethered to that trend by way of operating physical stores or providing online venues for those retailers.