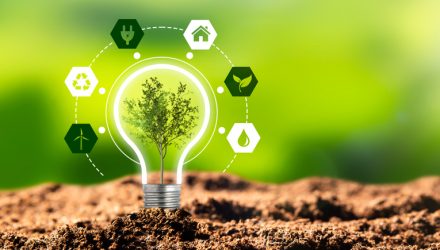 Investors embracing environmentally sustainable and clean energy strategies are having their patience tested this year.

What looked liked a favorable setup entering 2021 is taking some lumps, but the outlook for assets including the Goldman Sachs Future Planet Equity ETF (GSFP) remains compelling because it’s clear that governments are committed to expanding use of renewables and want to move forward with carbon-neutral agendas.

What’s vexing investors who are considering exchange traded funds such as GSFP is the fact that governments are being forced to use more coal and natural gas this year than previously expected. That’s sending the prices of those commodities higher while weighing on renewable energy equities.

Natural gas burns cleaner than coal, but its prices are soaring, and it’s by no means the cleanest energy source available. In relation to GSFP, many of that ETF’s components are dedicated to greenhouse reduction and purvey services and technology to that effect.

“For now governments may find themselves compelled to support greater use of fossil fuels – particularly gas – amid energy supply shortages,” adds BlackRock. “Natural gas may emit less carbon than oil or coal, but its largest component methane is another potent greenhouse gas. It too will ultimately need to be phased out if the world is to reach net-zero. The phase-out of natural gas and momentum toward net zero therefore rest on accelerating the development of clean energy supply.”

One way of looking at this is that the transition to carbon neutrality is going to take time, and while there’s sure to be some turbulence along the way, GSFP offers potential for patient investors, as indicated by spending forecasts.

“There has been massive investment in clean energy – an average of $1 trillion a year between 2016 and 2020 according to the International Energy Agency (IEA). More is needed to build a clean, resilient energy infrastructure. A net-zero transition by 2050 will require an average annual investment of nearly $4 trillion between 2026 and 2030, says the IEA,” concludes BlackRock.