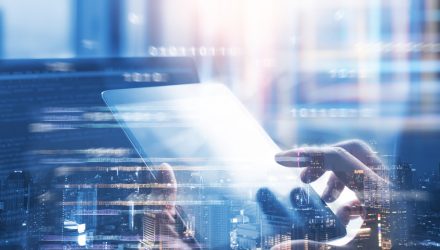 Apple (NASDAQ:AAPL) recently hit a market capitalization of $3 trillion, stoking some talk of when the iPhone maker will ascend to the $4 trillion club.

There’s also chatter about when Microsoft (NASDAQ:MSFT) will make its way to a $3 trillion market cap. Of course, there are dozens of exchange traded funds with which to tap the seemingly never-ending market value expansion in mega-cap technology stocks. Investors looking for a moderated though valid approach might want to consider the Goldman Sachs Innovate Equity ETF (GINN).

GINN follows the Solactive Innovative Global Equity Index (Net total Return, Unhedged, USD) and isn’t a dedicated tech ETF, though it allocates 34.2% of its weight to that sector, according to issuer data. In other words, GINN offers more-than-adequate leverage to more tech upside, which is exactly what some analysts are wagering on.

“While the supply chains issues have curtailed some growth for Apple on this massive product cycle playing out across its entire hardware ecosystem, we believe the pent-up demand story for Cupertino is still being underestimated by investors with chip issues a transitory issue in our opinion,” Wedbush analyst Dan Ives writes in a recent note to clients.

Bolstering the case for Apple is that, although there’s optimism that global supply chain issues will ease this year, demand for iPhones is outpacing supply, and that could be a spark for the company’s profit reports this year.

“Based on our supply chain checks over the last few weeks, we believe demand is outstripping supply for Apple by roughly 12 million units in the December quarter, which now will add to the tailwinds for Cupertino in the March and June quarters as the supply chain issues ease in 1H22,” says Ives.

As for Microsoft’s potential ascent to the $3 trillion market cap neighborhood, a lot of it rests on its fast-growing Azure cloud computing unit.

“Since Satya Nadella took over as CEO of Microsoft in 2014, the company has doubled down on its cloud business, making its Azure platform the No. 2 player in perhaps the most lucrative market in tech today,” according to S&P Global Market Intelligence.

Combined, Apple and Microsoft make up 4.6% of GINN’s roster. While that doesn’t sound like much, the advantage offered by the Goldman Sachs ETF is that with none of its components commanding an allocation north of 2.5%, single stock risk is significantly limited in this fund.