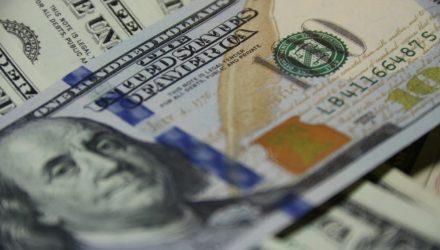 What Is Up With the Dollar?

With the U.S dollar having strengthened 6.6% in the last six months, investors are beginning to question whether the dollar has fundamentally changed direction after declining in 2017. We believe that despite the recent jump, the direction of the U.S dollar will be down from here over the long‐term. The three big drivers of currency performance ‐ interest rate differentials, the “twin deficits” and government policy – all suggest a weaker dollar is warranted.

With interest rates in the U.S. significantly higher than rates in the rest of the world, international savers have been flocking to the U.S. markets chasing higher rates of return. This has pushed up the value of  the dollar over time, as the demand for dollars has increased (see chart). While interest rate differentials have been responsible for much of the increase in the value of the dollar over the last few years, there are signs this may be changing. With global central banks expected to tighten monetary policy in the  next 12‐months, the interest rate gap should begin to close, slowly dragging down the dollar.

Like deficits, over time, government policy can also have an impact on the value of a currency. In the U.S., for the last 30 years, both Republican and Democrat administrations have pursued a ‘strong dollar’ policy, opting to sacrifice export growth in order to keep a lid on the price of imported goods. However, the current administration seem to be in favor of a weaker dollar. While a government does not have direct control on the value of a currency, they can influence its value via policy and trade decisions.