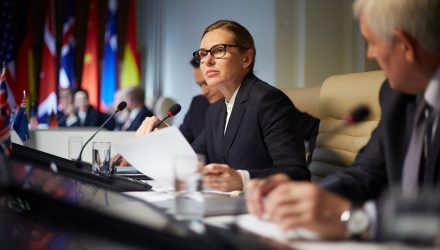 The markets rejoiced Wednesday, as Fed Chairman Powell cited uncertainties in the global economy as an indication that the Fed would be open to cut rates this year.

Some investors are concerned however, that a rate cut might actually curtail the gains made in the stock market, even causing a potential recession. Ritholtz Wealth Management CEO Josh Brown believes that this is patently false however, and that the markets are more likely to make new highs.

“With only a 25 basis point rate cut most likely, the best example of something like his that I can think of from recent history is 1995. You actually had a new all-time high in the stock market the day they did the cut. But it was a single cut. And a lot of the reason for that. They had done a surprise rate hike in 1994, which kinda crushed the bond market, and people were shocked. And I think what the 1995 single cut was about, was just taking some of the pressure off from that. Maybe almost like a mea culpa. Like we didn’t really need to do that. Maybe that’s what this is most like. And it would be likely that we make a new stock market high at the moment they are cutting rates, based on what’s going on right now. And it would be ironic. And people would look at that and laugh. But I actually don’t think it would be the end of the world,” said the CEO on CNBC Wednesday.

One word that Powell repeated throughout the testimony was “uncertainty”. While most investors fear uncertainty, Brown explains that it is actually a good thing for markets.

“There is always uncertainty. The only difference is sometimes market participants exhibit that they are uncertain and sometimes they don’t. But uncertainty at all times is ubiquitous. How certain were things on September 10, 2001? How certain were things in the year 1999? Everyone was certain that things would be great. Uncertainty is good news for investors. We’ve had uncertainty for 10 years, and arguably that’s extended the cycle. We haven’t had a market bubble because so many people have been pessimistic the whole way up. So you want uncertainty. Uncertainty is not a negative,” Brown emphasized.

Finally, Brown explains how despite Powell’s concerns about global economic problems, the U.S. is unlikely to inherit a recession in his opinion.

“The other thing is he’s citing foreign markets a lot in his commentary. And he’s not wrong. PMI’s in Germany and whatever. Here’s the thing though: in the modern history of the United States, we have never, never, not even one time imported a recession from a foreign country. Not even in the late 1990’s when the ruble blew up, and Latin America blew up, and the Thai baht blew up. We didn’t import a recession then. We’re not going to import a recession now because auto manufacturing numbers coming out of Germany aren’t what you’d like them to be. So that is not a great reason to be like, we have to be vigilant about a recession ” Brown added.