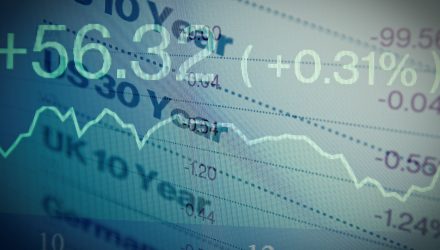 As U.S. equities continue to be roiled by volatility, fixed-income investors have been digesting the latest geopolitical news concerning optimism in a U.S.-China trade deal, as well as Brexit, which sent benchmark Treasury yields mostly higher on Tuesday.

Markets were lifted early Tuesday on renewed optimism that a permanent trade deal between the United States and China was progressing based on a Bloomberg report that China would slash the current 15 percent tariff on cars to 40 percent. Based on the report, the proposal to pare down the tariff would be reviewed by the Chinese Cabinet in the coming days, but it has yet to be finalized and is subject to change.

Nonetheless, the news was interpreted by the capital markets that talks between the two economic superpowers are progressing.

The British pound retreated on Monday as British Prime Minister Theresa May announced that the parliamentary vote to decide the fate of Britain’s Brexit decision to leave the European Union will be delayed. May cited a bevy of gloomy forecasts for the decision to delay the vote, saying that she listened “very carefully to what has been said in this chamber and out of it.”

With her premiership on the line as well as the stability of the government, May opted to “defer the vote originally scheduled for Tuesday and not proceed to divide the house at this time.”