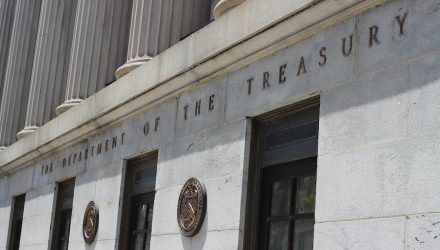 According to the most recent Treasury data, foreign ownership of U.S. government debt has been falling since a peak of about 55% during the financial crisis in 2008 to below 40% in November for the first time since 2003, the Wall Street Journal reports.

China, the largest foreign creditor to the U.S., held as much as 14% of all outstanding Treasury debt back in 2011, but only currently owns a little more than 7% of U.S. debt.

“The fears of the past were exaggerated,” Tony Rodriguez, who oversees taxable fixed-income investing at Nuveen, told the WSJ, adding that domestic investors could continue to buy a larger share of the government’s debt.

ETF investors have also exhibited a greater willingness to gain exposure to U.S. debt. For example, the iShares 20+ Year Treasury Bond ETF (NASDAQ: TLT) was among the most popular ETF plays so far this year, attracting $2.2 billion in net inflows year-to-date, according to XTF data.