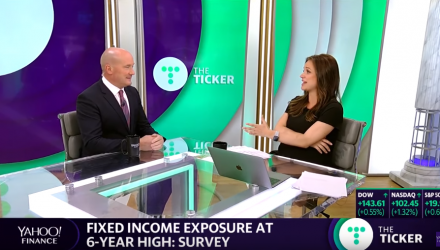 Uncertainty. It’s the buzzword defining today’s market. More investors are taking money out of equities and putting it into fixed income; meanwhile the market is moving higher. ETF Trends CEO Tom Lydon appeared on Yahoo! Finance’s ‘The Ticker’ on Monday to chat with anchor Seana Smith to make sense of it all.

According to a survey mentioned during the segment (full video below), fixed income exposure hit a 6-year high in the month of May. Lydon takes the finding in light of the big picture, noting that the fixed income allocation has been low compared to long term averages. Although exposure is low, what Lydon has been seeing is more money flowing into fixed income ETFs.

“And it’s for all the right reasons,” Lydon said. “We’re in a 10-year bull market here and this is going to be the longest bull market in history. Investors are right to take a little bit off the table. There are opportunities in bonds especially with the opportunities of lower interest rates.”

Outside of fixed income opportunities, Lydon sees opportunity in equities—disruptive technologies, in particular. He pointed to ARK Invest ETFs that present potential opportunity in this area. According to ARK, its ETFs seek to offer …

Lydon sees more of the same in terms of leaders in equities.

“FANG stocks continue to do very well,” he said.

However, the S&P 500 of today is not what it was in the past, Lydon notes. “It’s not really a diversified index any more. If you like the S&P 500, there is an ETF called RSP — the Invesco S&P 500 Equal Weight ETF (RSP) — which is equally weighted.”

There are opportunities outside of U.S. as well, Lydon notes in the segment.

“There are some great opportunities outside the U.S., especially emerging markets that really haven’t kept pace the way it has in the past,” he said. “The P/E ratios in some cases are in single digits. Look to the unloved ares because historically they tend to come back.”