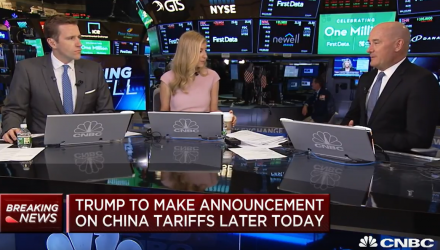 Apple lost 2.7% on potential issues looming as the trade war escalation between the U.S. and China could negatively impact computer parts. While the trade wars continue to move and shake the U.S. capital markets, it hasn’t deterred investors from deploying capital into exchange-traded funds (ETFs)–$167.9 billion worth of inflows.

“We’re having more money coming in to U.S. equity ETFs, U.S. fixed-income ETFs than international ETFs that we saw at the beginning of the year,” said ETF Trends publisher Tom Lydon on CNBC’s Closing Bell on Monday.

Perhaps the move to U.S. equity ETFs presages that more pain is headed towards emerging markets as trade war uncertainties continue to be a thorn in their side or it’s simply a matter of investors following the money and with the major U.S. indexes like the S&P 500 hitting record highs, the U.S. stock market has been the go-to strategy. However, there is also considerable value belying emerging markets when taking a closer look at fundamentals.

“We’ve got this big decline, but the PE (price-to-earnings ratio) is around 10 in China, 11 in emerging markets,” said Lydon. “There’s some emerging market ETFs that are really, really cheap and also, you can get them for an expense ratio of 14 basis points.”

While the two economic superpowers continue to lock horns on trade, a positive outcome on trades talks could give a much-needed boost to China-focused ETFs and emerging market ETFs.  As Lydon suggests, many of these ETFs from abroad present a profitable opportunity that can be realized, especially if China and the U.S. ameliorate their trade differences.