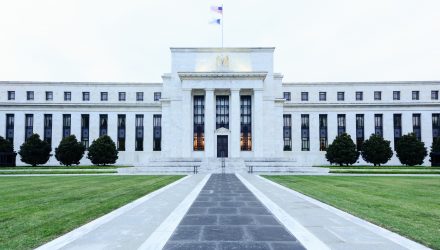 The Fed vs. the ECB: Who Will Blink First?

If bond investors have learned anything this year, it is that the “winds of change” can blow in dramatically different directions regarding monetary policy. As the first quarter was coming to a close, many wondered where a rate cut would more likely come from, the U.S. or the eurozone. In other words, which central bank would blink first? Against this backdrop, I thought it would be interesting to see how market sentiment has shifted from where we were only four months ago.

The table above highlights three main observation points. The first point on the calendar was roughly the middle of December 2018, right before the Federal Reserve’s (Fed) last rate hike. You can see there was basically a “student body right” mentality at the time that the Fed would raise rates in 2019 (92.7%), with zero chance of a rate cut. For the European Central Bank (ECB), the chance of a 2019 rate hike was placed at 44.5%, and little chance of a decrease (6.4%) was seen.

Let’s fast forward to the end of March. For the Fed, the implied probabilities did a complete 180. On March 27, there was now zero chance of a rate hike, and a whopping 77.3% chance of a rate cut. While the numbers are not as dramatic for the ECB, the end result was similar: 5.5% for an increase versus 28.6% for a decrease.

What about now, you ask? Ah, yes, it’s amazing what happens when the market receives data it is not expecting—that is, better than expected. This was especially true here in the U.S. While nothing has changed on the rate-hike front, the odds of a rate cut have now been almost cut in half (40.6%) as of this writing, which leaves the Fed Funds target range unchanged for the year. On the other side of the Atlantic, the chance of an increase in rates basically has been removed, with the probability of a rate cut sliced to only 11.3%.

It’s important to identify what type of monetary policy easing one should expect, if that happens at all. The nine Fed rate hikes have certainly given the FOMC some cushion, albeit modest, to lower rates if need be. However, don’t lose sight of the balance sheet. The quantitative tightening that was put in place will be coming to an end. Also, as I posted two weeks ago, Treasury yields have plummeted since November 8, easing financial conditions.

The ECB has less leeway. Rates are already zero or negative, so lowering rates would appear less likely. It also announced plans to stop new purchases for its balance sheet, so one would think this option is off the table for now, unless things take a dramatic turn for the worse. Rather, forward guidance appears to be the “easing tool” that comes to mind. For example, the ECB could replace its language of seeing rates “at their present levels at least through the end of 2019”…with “at least through mid-2020”.

If I were to choose between the Fed and ECB, I’d say the latter blinks first, and uses the forward guidance change. As for the Fed, consider these little tidbits. The March FOMC minutes noted “some members” seeing a further modest increase later this year, while N.Y. Fed President Williams recently stated that economic “worries have receded somewhat.”

Unless otherwise stated, data source is Bloomberg, as of April 14.