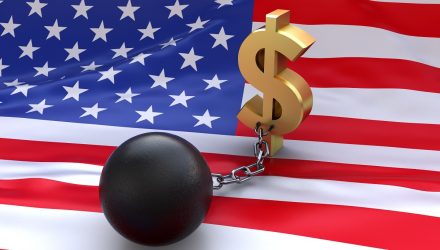 Reducing the trade deficit and national debt has been a goal for U.S. President Donald Trump, but the U.S. government’s public debt has risen now to more than $22 trillion — the highest it has ever been, according to data from the Treasury Department. The new debt level reflects a rise of more than $2 trillion from the day President Trump took office in 2017.

“This milestone is another sad reminder of the inexcusable tab our nation’s leaders continue to run up and will leave for the next generation,” reads a joint statement from former GOP Sen. Judd Gregg and former Democratic Gov. Ed Rendell, the co-chairmen of the nonpartisan group Campaign to Fix the Debt.

The Congressional Budget Office explained that as Congress continues more to spend than it gains through tax revenues, the national debt continues to burgeon.

“Other than the period immediately after World War II, the only other time the average deficit has been so large over so many years was after the 2007–2009 recession,” the CBO said last month.

“By 2029, debt is estimated to reach $28.7 trillion,” the CBO said in January, referring to federal debt held by the public — a figure that doesn’t include the billions of dollars that the government owes to itself. In recent years, those intragovernmental holdings have hovered well above $5.5 trillion.

DoubleLine CEO Jeffrey Gundlach explained why this is such a problem on CNBC today:

“People are starting to realize that the deficit and debt are totally out of control,” Gundlach said on CNBC’s “Halftime Report” Tuesday.

Gundlach explained that the key factor is that the yield curve between 3-year and 5-year Treasury notes is steepening, thereby creating a burgeoning deficit. Last year, U.S. national debt increased by more than 6% of GDP, he said. An even bigger deficit could mean trouble in a recession, said Gundlach, whose DoubleLine has $130 billion in assets under management.
Gundlach explained that a recession could be catastrophic for the economy, as it could create a domino effect resulting in a wave of downgrades from investment grade bonds into junk bonds.

“The economy is in such bad shape to withstand a downturn again,” Gundlach said. “The national debt is exploding while we’re having some of the best GDP year over year that we’ve had in recent years.”