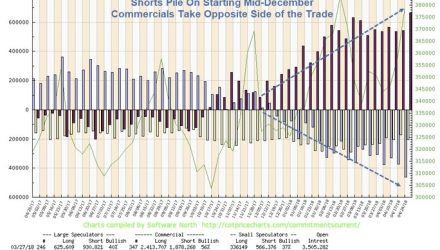 Iflationistas think a major inflationary move is at hand and they bet that with futures. I suggest the opposite. A commitment of traders (COT) report for 10-year treasuries shows record bets that treasury yields are headed higher.

Inquiring minds may be wondering what speculators were doing mid-2016. The feature chart is easy to read but it does not go back far enough. Here is a second treasury chart that completes the picture.

The volume of speculative bond shorts has reached a new record, according to CFTC data. h/t @5thrule pic.twitter.com/xVM2yEt1OH

I expect those record shorts will get blown out of the water. Only a small minority see things the same way.

According to Roberts, “Rates are ultimately directly impacted by the strength of economic growth and the demand for credit. While short-term dynamics may move rates, ultimately the fundamentals combined with the demand for safety and liquidity will be the ultimate arbiter.”

My position is Inflation is in the Rear-View Mirror.

Overdue credit card debts are piling up. More Americans are falling behind on mortgages. Car sales are dismal. Consumer spending is drying up. The global economy is slowing. These numbers are huge deflationary. Here are my definitions.

You may not like or agree with my definitions, but in a fiat credit-based global setup, this is how the real world works.

Those looking for a huge, sustained, inflation boost fail to understand credit dynamics.