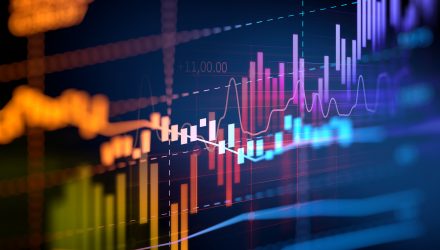 Panicked by the Yield Curve Inversion? Time to Load Up on This Sector

For about a week last month, the yield curve inverted for the first time since July 2006.

There’s a pattern here… each inversion hit about 18 months before a recession. In fact, the yield curve has inverted before every recession over the last 50 years.

As such, recession-proofing your portfolio is imperative for investors.

The good news is the yield curve inversion also means stocks should perform well in the short term.

The even better news is that I’ve found a sector that consistently outperforms the broader market after every yield curve inversion.

This Overlooked Sector Can Buoy Your Portfolio

It might seem counterintuitive that these stocks would do well when a recession is looming. After all, these companies make money by moving people and things.

This tends to happen a lot less during a recession. People stay home and buy less stuff. So there’s less for transportation companies to do.

In theory, this should hamper transportation stocks. But the data tells a different story.

The table below compares the average performance of the Fidelity Select Transportation Portfolio (FSRFX)—which holds a basket of large transportation stocks—to the S&P 500 after the last three yield curve inversions.

Now let’s take a closer look at how this plays out.

Back in July 2000, the yield curve inverted for the first time in 11 years. A recession struck the US economy nine months later.

Meanwhile, the S&P 500 started to creep lower almost immediately after the inversion. During the depths of the recession in 2001, it was down 17%.

Yet, at the same time, the Fidelity Select Transportation Portfolio (FSRFX) was up 28%.

Two years later, as the economy was recovering, the S&P 500 still hadn’t found its footing. The index was down as much as 31%. But transportation stocks were still on a roll, with FSRFX up 29%.

All told, transportation stocks rose over 81% in the four years after the July 2000 inversion. And they almost never treaded into negative territory during this period, as you can see in the next chart. 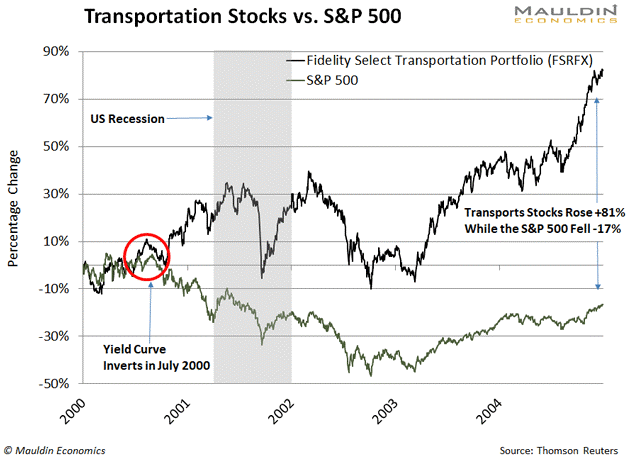 This begs the question, “Why are transportation stocks so resilient?”

So, when oil prices fall, one of the main costs for the transportation sector falls as well. And you know what falls during a recession?

The next table shows the drop in oil prices during the last three recessions.

In the period between the last five inversions and subsequent recessions, there’s always been a major spike in oil prices (another canary in the coal mine for a recession).

Then oil prices come back down. That’s because companies demand less oil when economic activity slows.

This acts as a cushion for share prices. It makes them much more buoyant compared to other types of stocks. Hence the big gains transportation stocks enjoyed while the S&P 500 floundered through the 2001 recession.

I’m confident the stock market will follow a similar pattern this go ‘round. It should continue to rise for the next 12 months or so. But the party won’t last forever.

Transportation stocks, on the other hand, should continue to do well long after that. Loading up on them now could help protect your portfolio today and through the rough patches ahead.

There are a handful of transportation ETFs on the market.

My favorite of the bunch is the iShares Transportation Average ETF (IYT). The fund has exposure to the major names in transportation. The top holdings include railroad bellwethers like Norfolk Southern Corp. (NSC) and Union Pacific (UNP) along with logistics giant Fedex Corp. (FDX). And while the expense ratio is relatively high at 0.43%, it is by far the most liquid ETF with average volume of 230,000.

Second on my list is the SPDR S&P Transportation ETF (XTN). This fund has exposure to companies like XPO Logistics Inc. (XPO), car rental leader Hertz Global Holdings Inc. (HTZ), and Delta Air Lines Inc. (DAL). It has the lowest expense ratio of its peers at 0.35%. However, it has less than one-tenth the volume of IYT with average volume of 22,000.

Lastly, we have First Trust Nasdaq Transportation ETF (FTXR). The company has a healthy mix of railroads like CSX Corp. (CSX) and automaker General Motors Co. (GM). It also has the highest dividend yield of the three with a 12-month yield of 1.40%. However, the fund is iliquid with average daily volume of 1,000 shares and has a high expense ratio of 0.60%.

I’ve recently put together a special report where I reveal some of my favorite recession-proof dividend stocks for 2019. It’s free for a limited time. Claim your copy now.