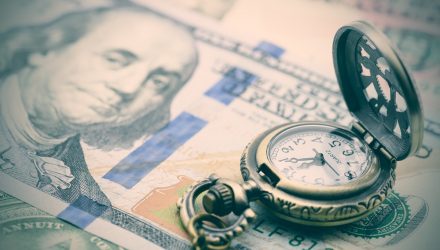 Long-Term Bond ETFs Are Back in the Limelight

With more expecting the Federal Reserve to cut interest rates ahead, exchange traded funds that track long-term debt are beginning to pick up steam as investors hunt for attractive income in a lower-for-longer yield environment.

The iShares 20+ Year Treasury Bond ETF (NASDAQ: TLT) attracted $247.2 million in inflows over the past week and brought in $1.1 billion over the past month, according to ETFdb data.

Meanwhile, yields on benchmark 10-year Treasury bonds were even briefly trading back below 2% on Thursday for the first time since 2016.

Investors and analysts highlighted the worsening projections for growth as a catalyst for the Federal Reserve to its loosening monetary policy outlook instead of tightening it. Sentiment for a rate cut picked up Wednesday and Thursday after the Fed held rates steady but signaled a possible cut in the months ahead to combat the weakening effects of a prolonged trade war.

Many previously assumed the Trump administration’s tax cuts and looser regulation would fuel stronger growth and inflation and, which would force the Fed to implement higher interest rates to keep the economy in check. However, the opposite has played out so far, with a falling 10-year yield, hitning that the economy is not performing as previously expected.

“Around the world economies are slowing down and central banks are in play,” David Norris, head of credit investing at TwentyFour Asset Management, told the WSJ. The change in monetary policy “certainly does add fuel to the fire” of the bond rally.

The low rates also encourages greater demand for riskier investments such as corporate bonds. For example, the iShares iBoxx $ Investment Grade Corporate Bond ETF (NYSEArca: LQD) was among the most popular bond ETF plays over the past week, bringing in $1.4 billion, and the SPDR Barclays High Yield Bond ETF (NYSEArca: JNK) attracted $516.8 million.