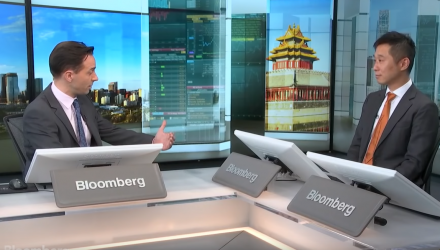 Chinese factories showed a marked increase in activity, according to the official purchasing managers index released Sunday. The index rose to a six-month high of 50.5 during the month of March–from 49.2 in February, which bested economists’ forecasts.

A mix of Chinese stimulus measures have been providing the fodder for economic growth, such as lower taxes, no corporate tax breaks, monetary policy adjustments, and more market access for foreign companies to set up shop. All in all, Wall Street is looking at the Chinese government’s latest efforts as a plus for its economy and a boon for China ETFs and bonds.

Chinese bonds made their debut on the Bloomberg Barclays Global Aggregate Index on Monday–a move that would give investors more access to China’s $13 trillion bond market. Markets analysts are expecting that this inclusion would garner a capital influx of $150 billion in foreign inflows.

In the video below, Mark Leung, chief executive officer for China at JPMorgan Chase & Co., says the inclusion of Chinese bonds in global indexes could result in inflows of up to $300 billion. He spoke exclusively to Bloomberg’s Tom Mackenzie in Beijing.