You are at:Home»Fixed Income Channel»How Active Fund Management Is Like Playing Poker 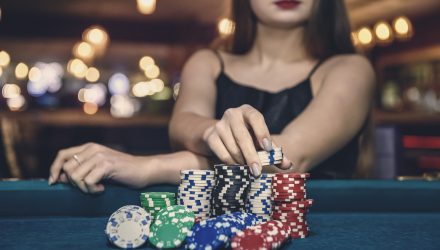 Investors’ increasing preference for passive investment products over active ones has been well-documented in recent years, and the trend has been accelerating. Moody’s now estimates that passive products may overtake active ones in only two years. The firm also explained why over time, it could become even harder and harder to find an active manager capable of outperforming their benchmark.

In a report this week, Moody’s Investors Service compared the transition from active to passive products to the adoption of new and improved technologies. Senior Credit Officer Stephen Tu and team said passive products “more efficiently channel the earnings of corporate America to the end investor than do traditional mutual funds.”

Moody’s describes the ongoing transfer of capital “from the larger number of average active managers to the smaller number of superior active managers” as essentially a form of “error collection.” The firm also said that over time, the nature of the market is that active management itself will become more and more difficult.

“In other words, the goal of ‘alpha generation’ can better be thought of as ‘error collection,’ just as a champion poker player wins earnings from others, and does not simply generate a return without considering the pool of potential winnings in the casino,” Tu and team explained. “Over time, only the best players will survive, leading to a more difficult game. Similarly, active management could become more difficult over time, as a growing number of below-average active managers drop out or see their assets continually decrease.”

“Despite market volatility late last year that theoretically should have created more opportunities for active managers to generate trading gains, active funds’ share did not increase and passive flows did not decline,” the Moody’s team wrote.

They believe the faster rate of M&A activity also reflects the shift from active to passive investment products as acquirers look for passive exchange-traded fund assets to buy. However, they add that there just aren’t very many big ETF franchises for sale, so “acquirers risk overpaying for these assets given their scarcity and pricing trends within the ETF industry.”

One reason active funds are having such a hard time

The fourth quarter’s extreme volatility may help speed up this shift given that many active managers have long argued that volatility enables them to outperform passive funds. That certainly wasn’t the case with most of the funds whose Q4 letters we reviewed, and the latest set of data from S&P Dow Jones Indices demonstrates just how difficult of a time active managers have been having.

The firm said 2018 was the ninth year in a row that most large-cap funds underperformed the S&P 500. Although S&P emphasized the fact that active funds widely underperform the benchmark, the findings also shed further light on what Moody’s said about active management getting harder and harder over time.

According to S&P, 85% of large-cap funds underperformed the S&P 500 on a 10-year horizon, while 92% lag the index on a 15-year timeline. Thus, while Moody’s emphasized the importance of telling the difference between the “average” active manager and the “superior” one, S&P shows one way to do just that. Of course, there are other ways as well, and even superior active managers can’t be right 100% of the time. However, a fund manager’s track record is one of the first things investors are advised to look at when picking an active manager.