You are at:Home»Fixed Income Channel»Herman Cain Bows Out of Federal Reserve Nomination 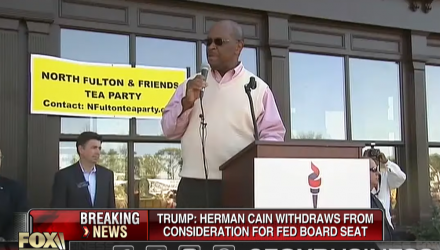 On Monday, U.S. President Donald Trump announced that former Republican presidential candidate and Godfather’s Pizza founder Hermain Cain will be bowing out of the nomination for a seat on the Federal Reserve Board.

President Trump took to Twitter to make the announcement:

My friend Herman Cain, a truly wonderful man, has asked me not to nominate him for a seat on the Federal Reserve Board. I will respect his wishes. Herman is a great American who truly loves our Country!

Earlier this year, CNBC reported that Trump was considering the former presidential candidate for a Fed governorship.The 73-year-old Cain was a former chairman of the Kansas City Federal Reserve, serving for seven years between 1989 and 1996 before leaving to focus on political activities.

“He won’t formally announce until the vet is completed … But he likes Cain and wants to put him on there,” said a senior official quoted by Axios who was in discussions with the president.

Cain purportedly met President Trump at the White House earlier this month with National Economic Council director Larry Kudlow in tow. The central bank board currently has two vacancies available and Trump was said to be meeting with various candidates to fill the open positions.

Trump’s frustration with the central bank has been well-documented. As has been the case whenever market volatility racks the major indexes, President Trump has been quick to denigrate the Federal Reserve for raising interest rates.

“They’re raising interest rates too fast because they think the economy is so good. But I think that they will get it pretty soon,” Trump told reporters in the Oval Office on Tuesday.

Trump is also facing blowback for his other Fed pick of conservative political activist and economics writer Stephen Moore. Moore served as an advisor for Trump during his 2016 presidential campaign and co-authored a 2018 book called “Trumponomics: Inside the America First Plan to Revive Our Economy.”