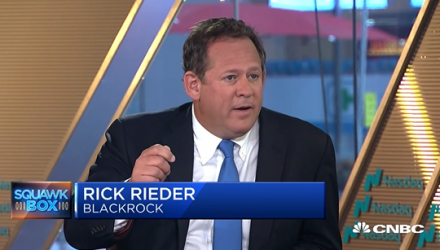 Rick Rieder, BlackRock global chief investment officer of fixed income, was interviewed by CNBC to discuss the state of fixed income markets and the U.S. economy. One important note he cited when analyzing fixed income yield curves is to pay attention to the front end of the curve.

With Federal Reserve Chariman Jerome Powell hinting at more rate hikes to come this year and the European Central Bank choosing to keep rates flat for the time being, Reider suggested that this front end of the yield curve is worth watching.

Rieder also opined on how the recent rate moves by the Fed and ECB speak to global growth.

“When yields move higher, the long end tends to lag,” said Rieder. “But if growth slows in the U.S. or the Fed stops, then the curve is going to start to steepen out. So one of the things when you think about the yield curve, if it’s what we call ‘bear flattening,’ meaning that you’re going to have a dynamic where interest rates move higher, that’s where the long end is going to lag.”