You are at:Home»Equity ETFs»The Red Sea: Dow Loses Over 1,300 Points in 2 Days 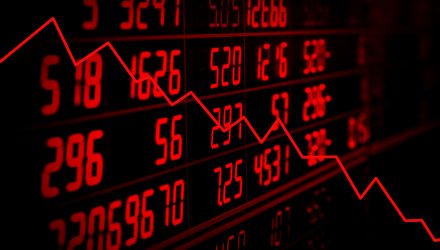 Investors have been seeing nothing but a sea of red with the Dow Jones Industrial Average falling over 500 points on Thursday, amounting to total loss of over 1,300 points the last two trading sessions.

Exxon, Chevron, Pfizer and Cisco were some of the top decliners in today’s sell-offs. The Nasdaq Composite finished today’s session about 90 points in the red and the S&P 500 closed just under 60 points down.

“The sellers have swamped the market and continue to dump stocks with every rally up, signaling the end of the selling is not quite over,” said Bob Lang, founder of ExplosiveOptions.net and a contributor to TheStreet.com’s Trifecta Stocks Newsletter. “Perhaps some capitulation has been met with the heavy concentration of selling that occurred late in the day, but it remains to be seen. There needs some sideways action for a bit before calling an ‘all clear.'”

The latest 1,300-point loss comes just two weeks after Federal Reserve Chairman Jerome Powell praised the growth of the economy and not long after the S&P 500 reached historic highs, which signals that the extended bull run may finally be coming to a close. However, with financial companies like Citigroup, Wells Fargo and J.P. Morgan Chase scheduled to release earnings tomorrow, positive results could help confirm that the latest sell-off is evidence of a typical market correction.

“We are well within the ranges of a normal market correction,” said Janet Johnston, TrimTabs asset management portfolio manager. “Next week, you’re going to start hearing about good earnings.”

According to a FactSet poll, analysts are expecting a strong earnings season–a growth of 19% in the third quarter. As such, others are viewing the sea of red as a perfect buying opportunity.

“We look at this as a buying opportunity,” said Dryden Pence, chief investment officer at Pence Wealth Management. “I would have my shopping cart out here.”