You are at:Home»Fixed Income Channel»Some Bond ETFs Get Pinched by Italy 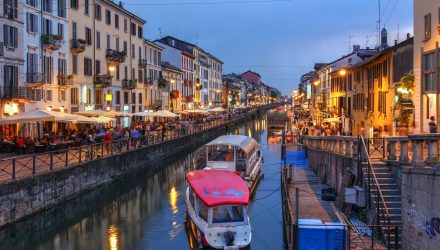 Some Bond ETFs Get Pinched by Italy

The iShares MSCI Italy Capped ETF (NYSEArca: EWI), the largest US-listed exchange traded fund dedicated to Italian equities, is lower by more than 16% year-to-date. That is enough to make EWI one of the worst-performing ETFs tracking a developed economy.

EWI is not the only ETF being pinched by problems in the Eurozone’s third-largest economy. Some fixed income ETFs with exposure to Italian bonds are being pinched as well. That includes the Vanguard Total International Bond ETF (NasdaqGM: BNDX) and the iShares International High Yield Bond ETF (CBOE: HYXU).

“The lack of contagion to other peripheral eurozone issuers, while welcome, should not lull investors into a false sense of security,” said Morningstar in a recent note. “Italy’s problems on their own do matter–a lot, in fact. Italy has the largest government bond market in the eurozone and the third largest in the world after the United States and Japan. This means that passive funds providing exposure to international sovereign bond markets, which for most U.S.-based investors are a tactical investment, can have a large weighting in Italian bonds.”