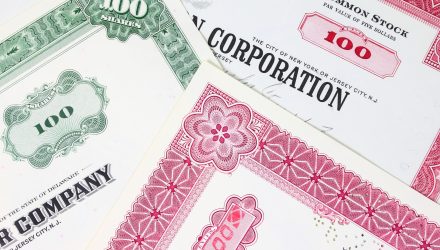 As market volatility descends upon U.S. equities, it’s causing a bond-buying spree as investors flock to safer corners of the market, particularly government debt. Corporate America is also looking to get a slice of the bond pie with a record number of companies offering bonds for sale to start the month of September, including iPhone maker Apple.

Apple joins a list of other industry movers and shakers, such as Disney and Coca-Cola. This, apparently, is standard fare for the month of September.

Per a Barron’s report, “The first week of September is usually a busy one for new debt issuance. But this go-round has been especially packed, with 35 investment-grade companies selling bonds in the first two days of the week.”

In addition, the report noted that “on Tuesday, a record-setting 21 companies sold $27 billion worth of investment-grade bonds. (That didn’t set a record for volume, however, as it remained well below the $52 billion of bonds sold on Sept. 11, 2013.)”

It’s an opportune time for companies to offer bonds for sale, especially when investors are hungry for yield at a time when interest rates on Treasury notes are experiencing lows. The low yields are causing market mavens to wonder whether negative interest rates are on the horizon.

Former Federal Reserve Chairman Alan Greenspan has a negative view on Treasury yields—literally—he foresees a fixed income environment with negative interest rates, which could come in “only a matter of time.”

It’s already a global phenomenon, but something that has yet to reach U.S. shores.

“You’re seeing it pretty much throughout the world. It’s only a matter of time before it’s more in the United States,” Greenspan said on CNBC’s “Squawk on the Street ” on Wednesday, adding investors should watch the 30-year Treasury yield, which hit an all-time low last week.

In addition, the 2- and 10-year yield curve spread is also flashing a recession signal with its inversion. As such, rates have been falling faster than a lead balloon, which could head into a territory U.S. government debt investors are not accustomed to seeing.

“We’re so used to the idea that we don’t have negative interest rates, but if you get a significant change in the attitude of the population, they look for coupon,” Greenspan said. “As a result of that, there’s a tendency to disregard the fact that that has an effect in the net interest rate that they receive.”