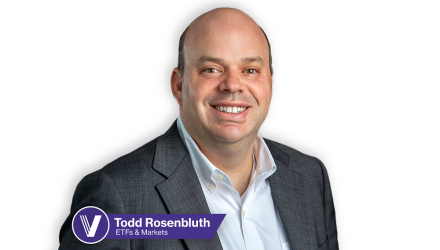 There’s about to be a new bond ETF king. Indeed, there might be a new one by the time you read this article. The Vanguard Total Bond Market ETF (BND) had $81.1 billion as of July 15, according Factset data used by VettaFi, a mere $400 million less than the current bond ETF leader, the iShares Core Aggregate Bond ETF (AGG). Despite this, iShares remains the industry leader across all ETFs, as well as fixed income ETFs, as of mid-July.

According to Athanasios Psarofagis, an ETF analyst with Bloomberg Intelligence, there was a $22 billion gap between the two core fixed income ETFs in March 2020. However, since then Vanguard’s offering has been the more popular ETF. Since the beginning of April, BND raked in $42.1 billion of new money, including $6.4 billion in 2022 alone, according to our data. In contrast, AGG gathered half the new money since April 2022 ($21.1 billion) and has suffered $1.3 billion of net redemptions.

The relative success for BND is likely tied to the growing usage of bond ETFs by retail investors and advisors that have historically preferred actively managed bond mutual funds, even as they shifted from active equity mutual funds to lower-cost, index-based equity ETFs. In addition, unlike with AGG, Vanguard shareholders can shift from using a mutual fund share class to an ETF share class easily. We believe that some of BND’s ETF inflows have stemmed from such activity.

For seven consecutive months dating back into December 2021, investors have redeemed money from bond mutual funds totaling $305 billion, according to the Investment Company Institute’s data. This is in stark contrast to the monthly inflows for the asset category dating back to April 2020. In 2022, we believe there’s been a trend to tax-loss harvest away from more expensive bond mutual funds as losses have persisted. Vanguard has been a greater beneficiary of this due to its strong brand with mutual fund investors and their advisors.

However, we would expect AGG and BND to continue to grow larger as a wide range of investors take advantage of the liquidity and tax efficiency benefits of bond ETFs. Advisors are increasingly using such products to support asset allocation objectives, and institutional investors are tapping into the liquidity of bond ETFs instead of sourcing individual bonds.