You are at:Home»Fixed Income Channel»4 Timely Bond ETFs Pack on Assets in April 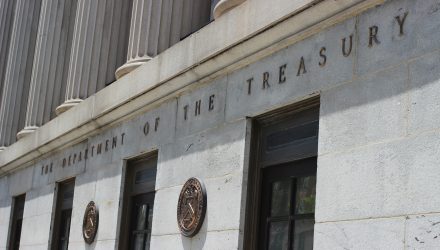 “More than $14 billion was added to U.S.-listed exchange-traded debt funds last month, the most since October 2014, according to Bloomberg Intelligence data. That’s the third consecutive month that funds holding bonds attracted more cash than their stock counterparts — the longest streak since at least May 2011,” reports Bloomberg.

Foreign investors hold about 43% of U.S. government debt, the lowest since November 2016. The foreign buyers group has steadily reduced their stake in U.S. debt from a peak of 55% during the financial crisis. However, data suggest other investors are picking the slack by embracing bond ETFs and are showing a preference for shorter duration fare.

“With duration fears taking hold, investors favored short-term U.S. government debt, sinking $2.3 billion into an iShares ETF that holds Treasury bonds with remaining maturities of between one month and a year, the most since January 2016,” according to Bloomberg.