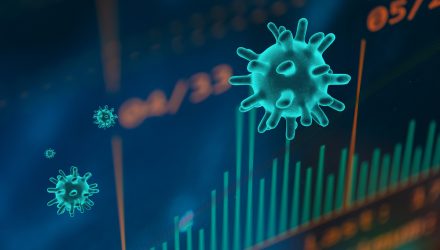 Financial stocks and sector-related exchange traded funds were higher Tuesday despite signs that Wall Street banks were bracing for more trouble ahead as the coronavirus pandemic continues to run its course through the economy.

The widely observed Financial Select Sector SPDR (NYSEArca: XLF) was up 0.5% toward the end of Tuesday’s session, paring earlier losses.

Weighing on the financial sector, J.P. Morgan (NYSE: JPM), Chase & Co., Citigroup (NYSE: C) and Wells Fargo (NYSE: WFC) all revealed they took a blow to their second-quarter profits as they collectively set aside $28 billion for a rainy day fund to cover potential losses on consumers and businesses that began to default on loans, following the widespread shutdown measures to contain the Covid-19 outbreak, the Wall Street Journal reports.

The more aggressive provisions amount to a sharp jump above what they initially stowed away in the first three months of the year, revealing a shift in sentiment over the length and severity of the pandemic’s economic fallout. For instance, JPMorgan, the largest U.S. bank by assets, stated it put away extra to prep for an elevated unemployment rate that could remain at double-digit levels well into next year, along with slower recovery in the gross domestic product than economists projected three months ago.

“This is not a normal recession,” James Dimon, JPMorgan’s chief executive, told the WSJ. “The recessionary part of this you’re going to see down the road.”

Banks have generated big profits lending to consumers and companies eager to take advantage of low-interest rates in the wake of the previous financial downturn. Ss we headed into the current Great Shutdown, Americans held record amounts of auto loans, credit-card debt, and student loans, while corporate debt also hit record levels. Given the current environment, many of these loans are now at risk.

“The pandemic has a grip on the economy, and it doesn’t seem likely to loosen until vaccines are widely available,” Citigroup Chief Executive Michael Corbat told the WSJ.