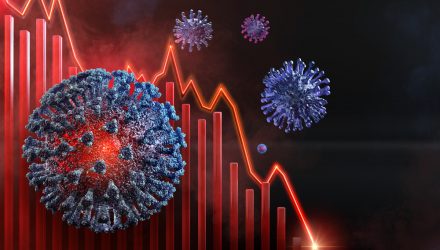 U.S. markets and stock exchange traded funds declined and were headed toward a weekly loss on concerns of a protracted economic rut due to the spike in coronavirus infections and on reports that rising tensions between the United States and China could threaten the Phase 1 trade deal.

A number of states, including Arizona, Texas, South Carolina, and Florida, saw COVID-19 cases jump by more than 30% in the past week, the Wall Street Journal reports.

The spike in infections has even caused Texas to halt reopening plans Thursday while some other governors enacted new measures to help contain another outbreak.

“Right now, the market is sort of on hold,” Rhys Herbert, senior economist at Lloyds Banking Group, told the WSJ. Investors “are really looking for guidance on what’s the next stage: Will we see signs of recovery or is there a danger things slip again?”

The banking sector was also among the worst hit on Friday after the Federal Reserve ordered banks to limit shareholder dividend payouts to preserve capital and restricted share buybacks in the third quarter, following the annual stress test.

Further weighing on sentiment, some speculate the U.S. response in Hong Kong, Taiwan and other matters in Asia could threaten the tentative trade deal with China, Reuters reports.

A Chinese official said that “the U.S. side should refrain from going too far with meddling,” the Wall Street Journal reports. The official added, “Red lines shouldn’t be crossed.”

On Thursday, the U.S. Senate passed a bill by unanimous consent that puts sanctions on Chinese officials, businesses, and banks that undermine Hong Kong’s limited autonomy from Beijing.