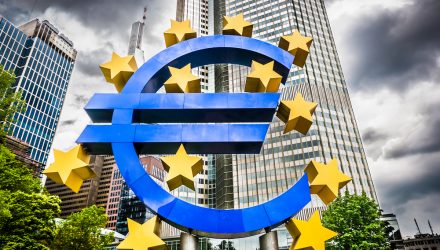 Europe region-related exchange traded funds retreated Thursday as the European Central Bank signaled an end to its accommodative policies easing and signaled it will execute its first rate hike ahead.

The ECB said it will end bond purchases on July 1 then hike interest rates by 25 basis points later that month, Reuters reported. Additionally, the central bank will hike rates again in September and could even include a bigger move with a 50 basis point hike, potentially its largest one-off increase since June 2000.

“We will make sure that inflation returns to our 2% target over the medium term,” ECB President Christine Lagarde said during a news conference.

The ECB is trying to tackle a rapid rise in inflation, which was at a record high 8.1% and was still rising.

“The Governing Council anticipates that a gradual but sustained path of further increases in interest rates will be appropriate,” the ECB’s monetary policy statement said. “High inflation is a major challenge for all of us.

“If the medium-term inflation outlook persists or deteriorates, a larger increment will be appropriate at the September meeting,” the added. Beyond that, “based on its current assessment, the Governing Council anticipates that a gradual but sustained path of further increases in interest rates will be appropriate.”

President Lagarde has outlined plans to bring the deposit rate to at least zero by the end of the third quarter from the current -0.5%, Bloomberg reported.

“It is good practice and it is actually often done by most central banks around the world to start with an incremental increase that is sizable, not excessive, and that indicates a path,” Lagarde told a news conference.

“The decisions that we have made today are not just one intention of one single month of July — it’s a whole journey,”Lagarde added in Amsterdam.