You are at:Home»Alternative ETFs»ETFs to Track Continued Volatility in the Japanese Yen 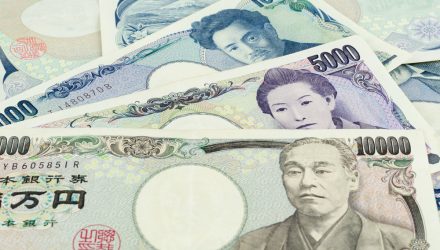 ETFs to Track Continued Volatility in the Japanese Yen

The Japanese yen currency-related exchange traded fund is among the worst-performing of developed country currency funds this year, and it may continue to experience volatility as the country looks at a number of domestic issues.

Bank of America Japan’s Shusuke Yamada warned that the fall elections, a new national endowment to fund university research initially worth 4.5 trillion yen ($41 billion), and mergers and acquisitions will likely put pressure on the yen through the rest of the year, Bloomberg reports.

With the popularity of Prime Minister Yoshihide Suga declining in response to the spike in COVID-19 cases, investors see the possibility of a government shift after the autumn elections. Consequently, this political uncertainty over the next 2–3 months will fuel volatility, which is currently at historic lows.

“With political risk at home and a potential announcement of the Fed’s tapering, USD/JPY vol would be supported,” Yamada said in a note. “We expect USD/JPY to rise to 116 by the year-end.”

Furthermore, the endowment fund launch along with new outward mergers, which have been suppressed by the COVID-19 Delta variant risk, could further add to Japan’s negative basic balance of payments by the fourth quarter, which would weigh on the yen currency.

More aggressive ETF traders can look to leveraged ETF strategies to capitalize on the turns in the Japanese yen. For example, the ProShares Ultra Yen (NYSEArca: YCL) tries to reflect the daily 2x or 200% return of the the U.S. dollar price of the yen. Additionally, the ProShares UltraShort Yen (NYSEArca: YCS) tries to reflect the daily -2x or -200% daily return of the USD/JPY currency pair.