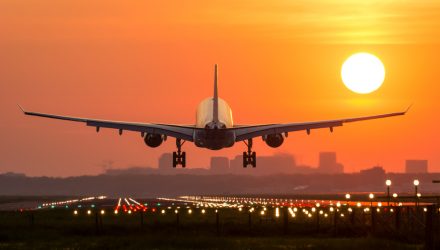 Will It Be A Soft or Hard Landing? How To Track The Fed’s Glidepath

The U.S. Federal Reserve (Fed) is tightening monetary policy in an effort to bring down the rate of inflation while still not tipping the economy into a recession. The process of neutralizing the impact of the massive amount of government stimulus we have seen in response to the economic impacts from the COVID pandemic will take time. In this article, we discuss some of the signposts pointing the way to success.

The Fed’s two goals of price stability and maximum sustainable employment are known collectively as the “dual mandate.” Price stability is estimated to be 2% average annual inflation as measured by the Price Index for Personal Consumption Expenditures (PCE), which is similar to the more broadly followed Consumer Price Index (CPI). The Fed estimates full employment to be consistent with an unemployment rate of approximately 4%. While the unemployment rate is currently less than 4%, inflation is running well above the Fed’s target, which leads to the Fed’s recent shift to tighter monetary policy.

While getting inflation down to the Fed’s long-term target without causing a recession is quite difficult, it is possible. Importantly, we can track the Fed’s progress towards this goal in real time.

To paraphrase the famous economist Milton Friedman, inflation is too much money chasing too few goods. We can see this phenomenon in action by looking at the growth rate of broad money, as measured by M2, and comparing that to the year-over-year change in CPI as illustrated in exhibit 1. 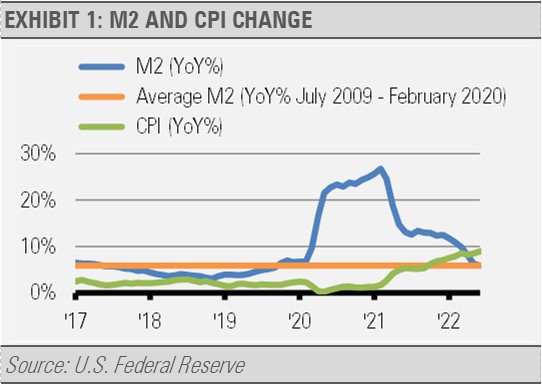 CPI really took off about a year after M2 growth shot higher because of multiple rounds of government fiscal stimulus and continued monetary stimulus from the Fed.

Now that M2 growth has fallen back to near where we were on average during the previous business cycle, we can expect CPI pressures to begin to subside as well. Of course, it will take time for the economy to absorb all that extra cash that was pumped into the economic system, and the Fed’s balance sheet reduction will help in that regard.

While CPI has been running hot, so has jobs creation. Throughout most of the current business cycle, monthly jobs creation has been above the previous cycle average of 168,000 per month. In fact, during the first half of 2022, jobs creation averaged 457,000 new jobs each month. 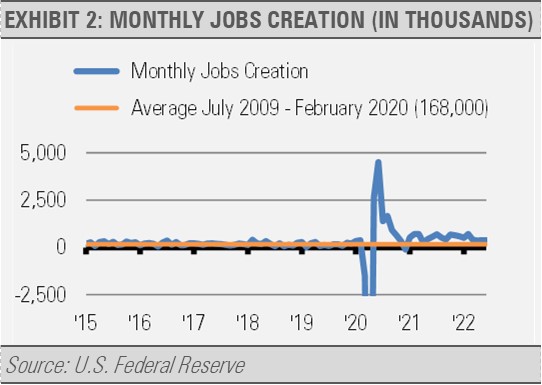 While there are signs of jobs growth slowing, the Fed does have a little more wiggle room here. With the unemployment rate below the Fed’s target, we could see softening of labor market conditions without the economy tipping into recession.

Our work suggests that the Fed does not have to do much more to guide CPI back down to a more sustainable path while allowing jobs growth to continue. We estimate that given the pace of Fed policy tightening and the drop back in economic growth, we can see inflation stabilizing closer to the Fed’s target in approximately two years. Moving more quickly and forcefully increases the risk of economic disruption and recession in our view.

So long as the Fed maintains its present course, keeping short-term interest rates near current levels or a little higher and reducing the size of its balance sheet at their stated pace, the economy should be ok.