You are at:Home»ETF Strategist Channel»U.S. Markets Down Slightly as China Trade Dispute Continues 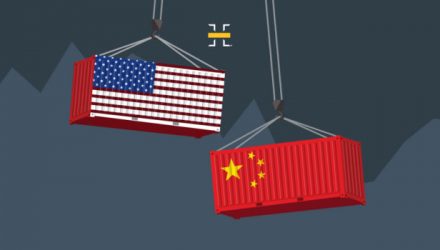 Hopes for a quick resolution to the China trade dispute faded this past week, and the market had to come to terms with a new reality. After a shaky start, stocks rallied and ended the week down only slightly as measured by the S&P 500, helped along by a postponement of another set of potential tariffs, this one targeting foreign automakers. There was other positive news on the trade front as well, as Trump lifted existing tariffs with Mexico and Canada. This was the first time he had rescinded tariffs once put in place.

U.S. economic data was mixed – retail sales were off on weak autos while homebuilder sentiment rose to a seven-month high. Housing starts climbed more than expected and consumer sentiment, as measured by the University of Michigan survey, rose to its highest level in 15 years. Elsewhere, in China, retail sales also came in below expectations as the tariffs began to bite, even as the government promised to deliver more economic stimulus as needed. Global stocks declined.

Trade brinksmanship has been a feature of this administration, resulting in substantial market volatility, though there has been a general belief that all parties would eventually recognize that it is in their interest to get things resolved. The U.S. economy has generally remained strong, though business investment has lately showed some signs of weakness. Nonetheless, both the S&P 500 and the Dow Jones Industrial Index are up double digits on the year.

For the week, U.S. markets were down -0.7% as measured by the S&P 500, compared to -0.8% for international markets (based on the MSCI All Country World Index ex-US), -3.6% for emerging markets (MSCI Emerging Markets Index), and +0.2% for developed, (MSCI EAFE Index). Rate sensitive sectors led the pack (utilities and real estate), while financials, telecom, and industrials underperformed.

During the week, U.S. and China both turned up the volume: China levied $60 billion of tariffs on U.S. goods, while the U.S. acted to restrict market access for the Chinese telecoms firm, Huawei.

Unlike some previous disputes, there are no clear signs when the current stalemate with China may end. We continue to monitor the situation closely by watching China’s trade situation, and the personal dynamic between the two leaders, Trump & Xi. We are also keeping a close eye on China stimulus, as well as the upcoming meeting of President Trump and Xi that will occur at the end of June during the G20 Summit in Japan.

It was a strong week, relatively speaking, for defensive stocks, which outpaced the broad markets. The CBOE Volatility Index (VIX) fell as the week went on, ending at 16, exactly its one-year moving average. In spite of the turbulence, the S&P 500 is off just about -3% from its 52-week highs reached about three weeks ago and up more than 22% off the December lows.

U.S. Treasury yields declined by seven basis points on both the 2-year and the 10-year, as risk aversion drove money into the asset class. The 10-year ended the week to yield 2.38%, near its year-to-date lows. Credit spreads widened with notable weaknesses in high yield (+13 basis points), while investment grade bonds ended the week three basis points higher.