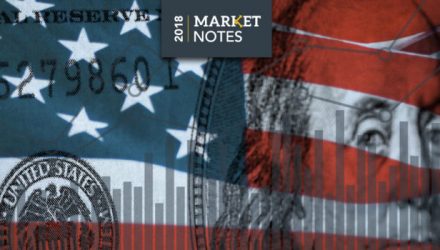 The Federal Reserve Board last week left a key short-term interest rate unchanged, as expected. But the Fed also explicitly stated that economic activity has been strong—suggesting to some investors that the Fed could resume its rate hikes in the near future. Other data points signaling economic strength included continued low unemployment and better-than-expected U.S. pending home sales in June. That said, ISM services sector data and nonfarm payrolls were weaker than anticipated.

In stark contrast, Eurozone GDP slowed more than expected during the second quarter (while inflation edged higher than was forecast). The difference in GDP growth between the U.S. and Europe is now at its widest since the second half of 2014. Manufacturing PMIs across the region were mostly lackluster—although France showed some signs of strength by beating estimates. In addition, UK construction PMI beat expectations.

In Asia, the Bank of Japan stated it would increase by two-fold the range in which it allows the yield on the 10-year Japanese government bond to move. This announcement, along with dovish forward rate guidance, created the biggest swings in local bond yields in two years. Elsewhere, China PMIs came in below forecasts while Australian retail sales were better than expected.

In the U.S. equity market, the real estate and healthcare sectors benefited from strong second-quarter financial results and future guidance. These sectors also outperformed as investors shifted toward more defensive areas of the market in the wake of rising tensions over U.S.-China tariffs. The trade and tariff issues also hurt cyclical sectors such as energy and industrials, which could see negative economic results if a U.S.-China trade war heats up.

Trade war worries also hurt European equity markets, as did fiscal risks in Italy that returned to the forefront last week. Emerging markets underperformed due to elevated tariff risks and because the U.S. imposed sanctions against Turkey and Russia. However, Latin American markets showed resilience and generally outperformed.

In the fixed-income markets, high-yield and shorter-duration debt instruments generally outperformed longer-duration securities. Emerging markets debt underperformed as the majority of emerging markets currencies depreciated. An exception: the Brazilian real had another strong week, mitigating some of the downward pressure on emerging markets.

Economic data last week showed continued strength in the U.S. economy—which means the Fed remains on track to raise a key short-term interest rate at its next meeting in September. This has raised some concerns about the possibility of an inverted yield curve, in which yields on short-term securities are higher than rates on longer-term issues. An inverted yield curve isn’t the end of the world for equity markets, but it does tend to slow economic activity.