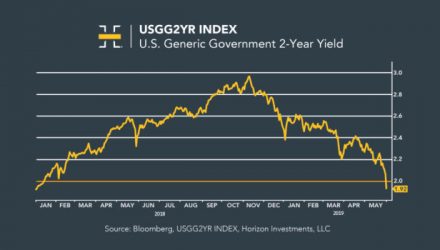 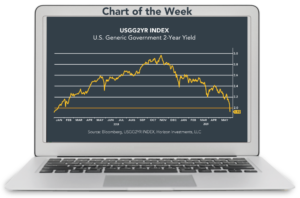 Markets continued to decline last week as worries over the U.S. China trade dispute and global growth grew, but the big news came on Thursday night, again via a Tweet, when President Trump threatened to levy tariffs on Mexico over an immigration dispute. U.S. stocks reacted poorly, dropping more than one percent on Friday, capping off the fourth straight week of declines. Treasuries rallied, with the yield on the 2-year falling below 2% for the first time since January 2017.

U.S. stocks sold off as investors rushed to safe havens in the fourth straight week of declines. President Trump’s Tweet on Thursday night threatening tariffs on Mexico led to a -1% across the board drop in U.S. equity markets on Friday. For the week, international developed equities were down -2.1% and emerging markets were up 1.9%.

Mexico is one of the U.S.’s biggest trading partners. Tariffs, if they go into effect, are likely to raise prices on a whole range of products for consumers, from autos-to oil-to avocados, ultimately impacting consumer spending

Mexico is sending trade representatives to the U.S. to talk with the Trump Administration. There is some hope this can be resolved quickly without the tariffs going into effect. The Federal Reserve meets on Tuesday and Wednesday to discuss monetary policy. U.S. jobs numbers for May will be released on Friday. In the U.K., the race to replace Prime Minister Theresa May is getting heated.