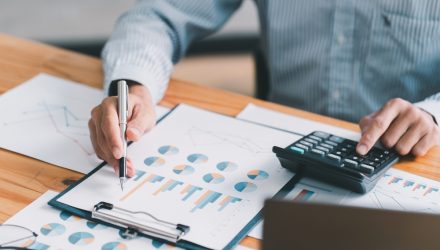 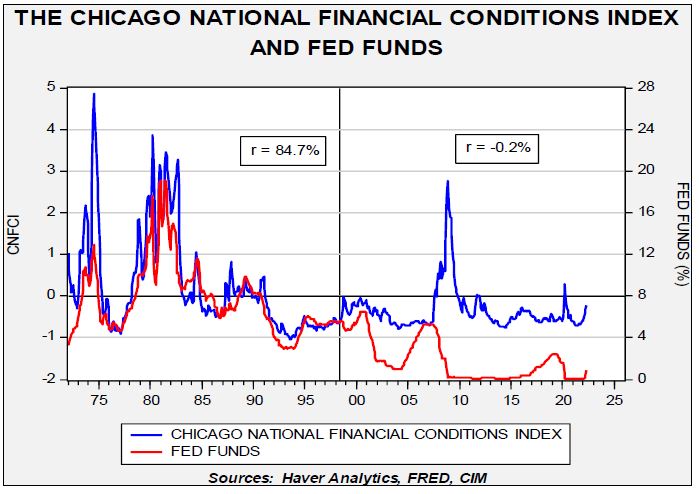 But, after mid-1998, the two data series became almost uncorrelated. What happened? A couple of factors likely affected this relationship. The first was the passage of the Gramm-Leach-Bliley Act, which eliminated the difference between commercial and investment banking. This bill changed the financial system, leading to more financial activities occurring outside the traditional banking system. In other words, the non-bank banking system was fostered by this bill. Why is that important? To illustrate, instead of borrowing from a bank, firms could issue debt or do collateralized borrowing in a much less regulated environment. Raising the policy rate didn’t necessarily lead to reduced borrowing because the financial markets have more ways to provide liquidity due to the changes in regulation.

The second factor was greater transparency in monetary policy. Even in the late 1980s, the FOMC acted in secret. “Fed watchers” tried to divine if a policy change had occurred by monitoring money supply data or bank reserve changes. But by the mid-1990s, the FOMC started announcing when the policy rate changed, and over the years, it has been increasingly transparent about its policy expectations. In general, society tends to treat transparency as a good unto itself. But by making its policy direction clear, markets could adjust and thus had little to fear from “surprises.” In the non-bank banking system, participants could use derivatives to insulate their positions from policy changes, rendering them less effective.

Recent history shows that when financial conditions weaken, it takes aggressive and swift action by the FOMC to reduce it. In March 2020, financial conditions deteriorated rather quickly, and not only did the FOMC cut rates rapidly, but it implemented a broad intervention into the financial markets to support their function. In addition, the balance sheet was expanded at a pace not seen outside of wartime. Clearly, the pandemic was part of the policy response, but widening credit spreads and other signs of financial stress were also part of the Fed’s actions.

Although the call for purposely undermining financial conditions is understandable, the above chart shows it could trigger unforeseen outcomes. We are no longer in a world where financial conditions deteriorate in lockstep with changes to the policy rate. Instead, over the past 24 years, these conditions have shown a tendency to ignore policy tightening, only to deteriorate rapidly with little warning. A modest weakening of financial conditions might be welcome, increasing the potency of tighter policy. However, a sudden spike, as seen in 2008 and 2020, could be destabilizing, forcing the FOMC to rapidly reverse its current policy path. Sadly, such events are almost impossible to predict in advance, although we can say that they seem to occur after tightening cycles.

It is possible that 2008 and 2020 may reflect the immaturity of the non-bank financial system, and markets may have evolved to a point where such market events have become less likely. The backstops offered by the Fed during March 2020 might serve as a blueprint for containing financial crises. Therefore, allowing financial conditions to deteriorate is less risky. However, it appears to us the burden of proof lies with proving that tightening won’t “break something.” And so, we remain vigilant, watching for funding issues that could trigger a run on liquidity and force the FOMC to ease.