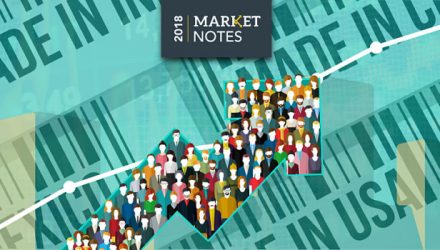 Although investors cheered a strong jobs report last week, economic data out of the U.S. was mixed overall. While nonfarm payrolls exceeded estimates, jobless claims and the unemployment rate ticked up.

The U.S. equity market closed higher for the week. Technology stocks were the top performers as investors continued to be attracted to tech’s high growth and relative lack of sensitivity to changes in interest rates. In contrast, interest-rate-sensitive sectors (such as utilities, real estate and consumer staples) underperformed on concerns that strong economic growth could lead to higher rates.

Stocks posted solid gains last week, driven largely by a strong February jobs report that showed the best monthly job creation growth since mid-2016. Other positive developments included a slight easing of concerns about the potential for important tariffs to start a trade war, as well as news that President Trump and North Korean leader Kim Jong-un agreed to meet.

The jobs data helped U.S. stocks outpace international equities for the week. Growth continued to outperform value, with the technology and consumer sectors leading the way; the portfolios have benefited from our overweight to growth. Small-caps have also performed well recently; although, the portfolios have not been positioned to benefit from that development.

Bonds were essentially flat overall for the week, with high-yield debt and fixed-income securities with relatively short durations performing best. We have emphasized both of those asset classes in the portfolios because we believe that company balance sheets shall continue to remain strong and that interest rates shall rise (which would impact long-duration bonds the most).

Volatility fell significantly last week, with the CBOE Volatility Index (VIX) declining from roughly 20 (its long-term average) to approximately 15. Although that’s still higher than the VIX’s one-year moving average of around 12, it’s the lowest level for the index in more than a month. Investors were reassured by a solid and better-than-expected jobs report, a softening of President Trump’s stance on import tariffs, and the announcement of a future meeting between U.S. and North Korean leaders.

As of the end of last week, all Risk Assist models remained partially de-risked. If the market continues upward, we expect to re-risk the portfolios.

Bond yields rose slightly across the curve last week, modestly pushing down bond prices overall, while stock prices rose. As a result, global equities outperformed the broad fixed-income market by 3% for the week—bringing the one-year return spread between stocks and bonds to more than 18%. Even though stocks experienced a very rocky February, they’re outpacing bonds by over 5% year-to-date.

The positive jobs report last Friday is not expected to have a sizable impact on the Fed’s monetary policy decisions. Although hiring in February was strong, wage growth was flat to down relative to expectations—thus suggesting that inflation is likely to remain relatively soft going forward.

Last week was more positive than recent weeks for yield-focused investors. Equity yield plays of global infrastructure and REITs were up over 2.5% on average, while preferred stocks rose by nearly 1%. That said, long-duration Treasuries suffered somewhat as bond yields rose.