You are at:Home»ETF Strategist Channel»Stocks Slump on Trump’s Tariff Talk 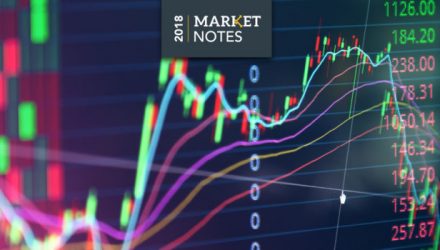 International economic data was more mixed. European manufacturing PMI was in line with expectations, with positive results from France and the UK offsetting disappointing data out of Germany. Germany also reported weakness in factory orders and industrial production.

Stocks lost ground during a volatile week that included more fears of a potential trade war between the U.S. and China. Small-cap stocks outperformed, due in part to the fact that most small companies derive little revenue from outside of the U.S. Thus, protectionist trade policies are less likely to hurt small companies than larger firms with an international presence. In contrast, technology stocks underperform as investors became more risk averse.

Overseas, European stocks outperformed. Investors viewed them as a relatively safe haven from the trade war concerns arising between the U.S. and China. However, emerging markets underperformed—especially emerging Asia—on concerns about the potential fallout from the U.S.-China trade tensions.

In the fixed-income markets, investment grade corporate credit outperformed as investors viewed that segment of the bond market as a relative safe haven. Emerging markets underperformed, however, as fixed-income investors looked to reduce their overall risk.

Global stocks posted gains early in the week but lost steam later on and ended up in negative territory. President Trump’s suggestion that additional tariffs on Chinese goods may be coming, a weaker-than-expected jobs report and the potential for higher inflation all dampened stocks’ returns for the week. Overall, the news is becoming more challenging for stocks. The market likely needs to see strong first quarter earnings to move higher.

We have remained overweight to large-cap stocks with an emphasis on growth shares. However, growth stocks are now struggling to post gains due to higher valuations and their relatively high exposure to risks created by the Trump administration. Small-caps may become an alternative in the current environment.

In the fixed-income markets, bonds were flat for the week (despite rising on Friday as stocks came under pressure). The portfolios remain positioned with a shorter duration than the benchmark index.

Although expected market volatility rose last week, the increase was somewhat muted. The CBOE Volatility index (VIX) ended the week at around 21.5, up from around 20 at the start, and we didn’t see the type of panic-based selling or de-risking like we saw back in early February. Investors, it seems, are becoming somewhat more comfortable with the new, higher volatility environment and taking some of the sell-offs in stride.

Related: The Importance of ETF Strategies that Rotate, Tilt, and Hedge

It’s interesting to note that the VIX’s one-year moving average is currently 12.6—versus an average of 19.4 since 1990. By that long-term measure, current volatility levels are not especially elevated.