You are at:Home»ETF Strategist Channel»Stocks Close Near Record Highs as Dollar Strengthens 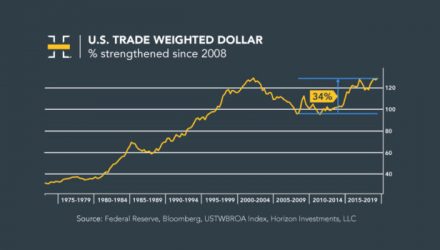 The amount the U.S. trade weighted dollar has strengthened since the 2008 financial crisis, according to the U.S. Federal Reserve.

A stronger-than-predicted June jobs report reduced expectations for a 50 basis point interest rate cut at the next Federal Reserve meeting. Outside the U.S., yields continue to decline in part due to the fact that Christine Lagarde, the newly appointed head of the European Central Bank, is perceived as dovish.

U.S. stocks ended the holiday-shortened week near all-time highs, up 1.7% for the week and 19.3% year-to-date, as measured by the S&P 500. Yields on U.S. Treasuries were up slightly as the yield curve flattened. Globally, stocks climbed 1.2% (MSCI EAFE Index).

The dollar strengthened as Friday’s jobs report suggested that the Fed may move more slowly on easing interest rates. It is now up 34% since the 2008 financial crisis – good for U.S. tourists traveling abroad, but a challenge for U.S. export industries.

Federal Reserve Chairman Powell testifies before Congress on Wednesday (7/10) and Thursday (7/11), and the Fed releases the minutes from its last meeting on Wednesday. Markets will be listening intently for insight into the timing and magnitude of future interest rate cuts.