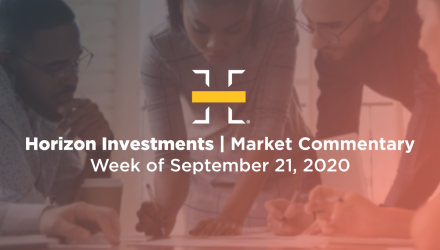 Upside euphoria continues to unwind in domestic equity markets with mega-cap tech leading the S&P 500 lower for the third straight week, its longest losing streak in almost a year. Once again, international shares fared better, with emerging markets up 1.6% (MXEF) and international developed up 0.8% (MXEA) last week, handily beating the 0.6% loss in the S&P 500 [Figure 1].

The internals of the price action in the U.S. were choppy, indicative of a low liquidity environment, but the bid to the beaten down large-cap value segment was evident once again.  Value beat growth by about 190 basis points (bps) last week, and the year-to-date (YTD) winner — the incredibly concentrated Nasdaq 100 — notched another poor week [Figure 1]. 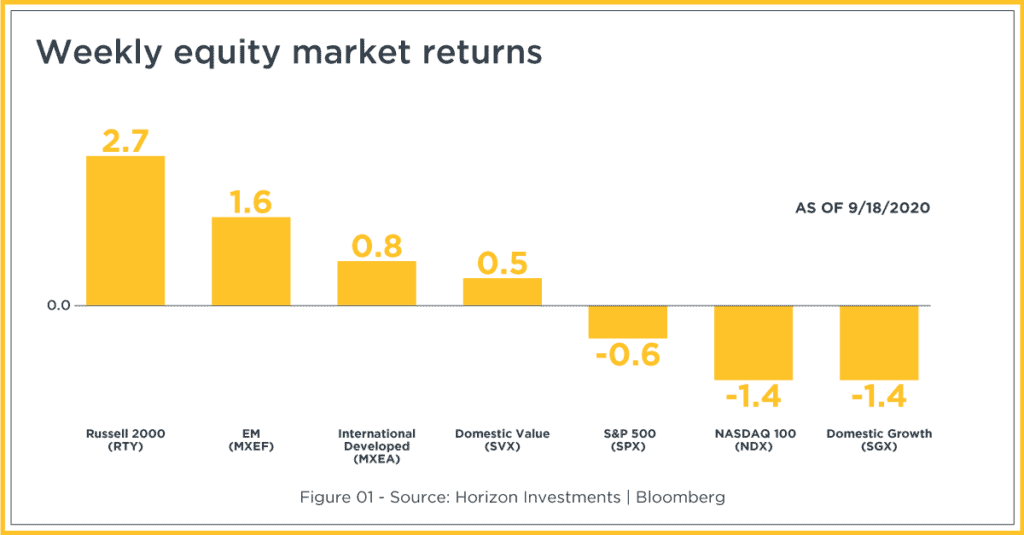 In contrast to the prior two weeks, small caps (RTY) rallied strongly, handily outpacing large-caps (SPX) [Figure 1]. We saw unwinds of speculative option action in tech going through again last week, and with volatility declining despite lower equities, we continue to think that this price action is a healthy correction to extended positioning rather than the start of a new trend.

The economy continues to show strength despite an uptick in Covid-19 cases — and despite less support for the unemployed from Washington. Last week, retail sales for August showed an increase, albeit a lower-than-expected one, and the University of Michigan Consumer Confidence Index exceeded expectations, printing its highest reading since March [Figure 2]. To us this speaks to the relatively strong position consumers were in before the economy shut down and augurs well for an eventual restart, whenever that occurs. 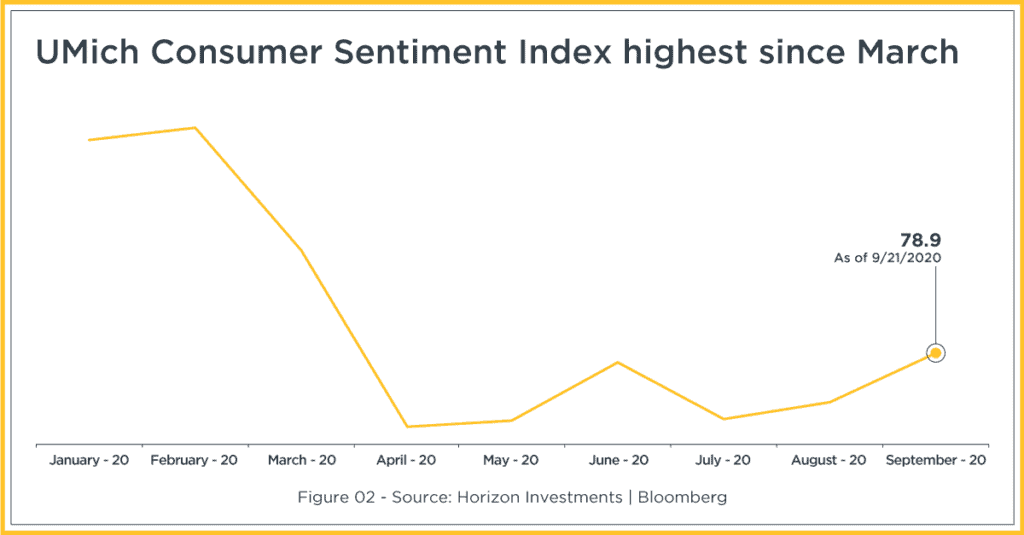 The passing of Supreme Court Justice Ruth Bader Ginsburg last Friday evening shakes up the upcoming presidential election and is likely to completely rule out any additional compromise in Washington, D.C. ahead of November 3rd.

Supreme Court appointments are an issue that tends to rank higher, in terms of importance, with Republicans than Democrats, so this development is likely to be a boost to Trump’s reelection chances. However, fundraising by Biden was very strong in the weekend following her death, so it could be a motivator on the Democratic side. Because 2020 continues to surprise, we wouldn’t rule anything out. We’ll be watching this, and especially Senate Majority Leader Mitch McConnell, closely in the coming weeks. After all, Sen. McConnell is in charge and it will come down to whether he wants to pursue Senate confirmation of a new Supreme Court Justice ahead of the November election. For McConnell and the GOP, there are pros and cons on each side of the decision.

The Federal Reserve’s meeting, which ended last Wednesday, was a relatively uneventful one in terms of policy actions, though they did clarify their new forward guidance. Some blamed last week’s sell-off in equities on a lack of fresh stimulus from the Fed (equities sold off during Wednesday’s press conference and continued to fall on Thursday and Friday). We don’t agree with this take. The Fed’s approach to markets has evolved dramatically to the dovish side. Rates are not moving higher for years, and the Fed put is stronger than ever.

Globally, other central banks are also marching more dovishly. Last week the Bank of England announced that it is studying negative rates — other G10 central banks are looking into them as well. As the impact of the new reaction function at the Fed starts to sink in, it will pressure the dollar and force other central banks to implement additional easing as well. The pull to lower rates is global, not just U.S.- based.

The U.S. dollar sold off last week (BBDXY -0.5%) [Figure 3], led lower by strength in Asian currencies. China continues to move their currency higher against the U.S. dollar, a sign of their continued strong rebound from Covid. But the currency is highly political as well, so it’s notable that the yuan is at its strongest level since before trade negotiations blew up in early May of last year. China is not looking to pick a fight with the Trump administration on trade at the moment, but in the age of Twitter diplomacy, things can change quickly. 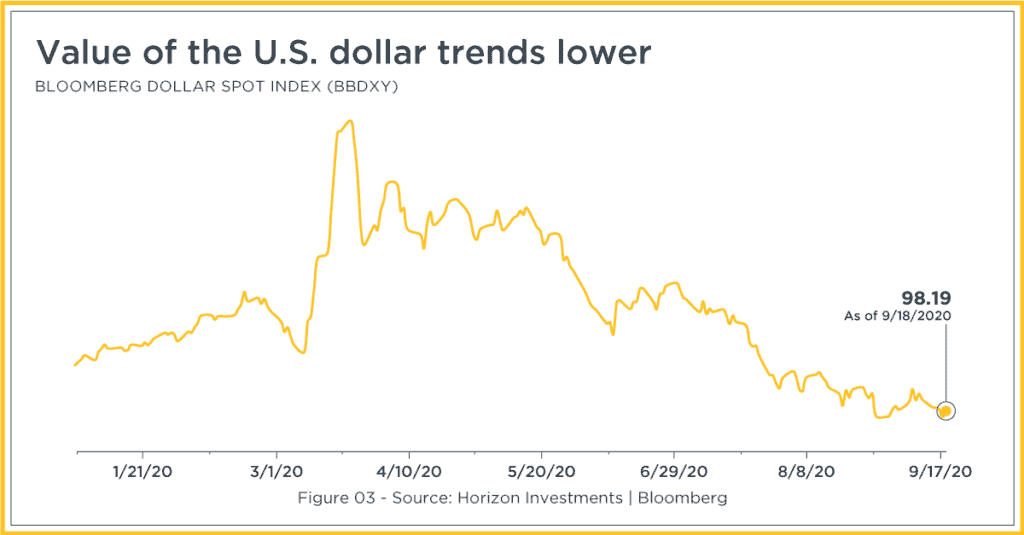 Here’s what we’re watching this week.

During last week’s Fed press conference on Wednesday, it was notable that the S&P 500 started selling off and continued lower, potentially signalling investors’ unhappiness with the outcome. Why? Likely because last week’s Fed meeting failed to offer all of the details around how it plans to actually implement its updated average inflation target policy. So on Wednesday and Thursday of this week, markets will likely be listening for guidance from Fed Chairman Jerome Powell, as well as other Fed speakers throughout the week, on what an explicit roadmap for implementation might look like.

Look for Global flash Purchasing Managers’ Indexes (PMIs) for the month of September on Wednesday. The big question isn’t so much whether manufacturing can continue its recovery momentum (though that’s important), but whether services, which have lagged manufacturing recovery, can show any improvement. This is especially important for Western economies, the health of which depends more on services than manufacturing activity. Flash PMIs may offer more confirmation that the easier economic gains of this recovery are behind us and that there’s more difficult sledding ahead, especially as Europe now grapples with a Covid second wave that’s forcing some countries to consider new lockdown measures and restrictions on activity.

Ten central banks around the globe meet this week, with cuts expected from at least two in Latin America, where rates are still above zero. We’ll also be watching for talk of additional easing by those central banks already at zero lower-bound.

The trends in Europe look troubling with Covid cases still rising and new lockdown measures being considered. Restrictions on activity hurt services economies more than anything else. And while consumers have shown remarkable resilience, largely propping up this recovery, can we expect them to be invincible? With the second wave of Covid now threatening Europe, this week’s Eurozone Consumer Confidence survey could show signs of cracking.

We continue to watch U.S. politics and the upcoming election. The death of Justice Ginsburg makes the acrimonious situation between Democrats and Republicans worse now that a seat on the nation’s highest court is in play. This poses a challenging situation for Senate Majority Leader Mitch McConnell, who’s ultimately in charge of deciding whether to put up a nominee or not prior to the election in November. For McConnell, there are pros and cons on either side. If he does decide to nominate and pursue confirmation of a candidate, that could prompt Democrats to use their power to threaten a government shutdown in October. We’ll be watching this one closely.

Covid is once again in the market’s perception, at least in Europe. Cases here in the U.S. seem to be ticking up slightly too. And there are credible sources now talking about another wave during the fall or winter in the U.S. that we need to prepare for. The truth is, Covid never really went away, but the market hasn’t been paying too much attention to it. That could change moving forward.