You are at:Home»ETF Strategist Channel»S&P 500 Rises to End the Quarter 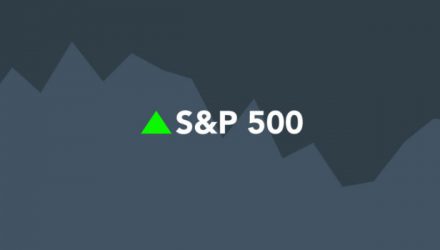 Stocks ended the week on an up note, capping an impressive quarter that saw the S&P 500 index climb 13%, the biggest quarterly gain since 2009. On Friday, the S&P rose 0.7%, with all 11 sectors positive for the quarter.

Spirits seemed to be lifting, too. The University of Michigan Consumer Sentiment Index rose to 98.4 at month’s end, well ahead of January’s 91.2. Investors began moving money back into the markets, with EPR Global reporting that $25 billion flowed into mutual funds and ETFs during the week ended March 13, the largest weekly flow in a year. Technology and energy stocks were both strong, while utilities and real estate lagged the broad rally.

U.S. 4Q GDP was marked down on the latest read, to 2.2% from 2.6%, and earnings expectations for 1Q remained muted. Europe continued to drag on global growth even as the effort to pass a Brexit bill in the U.K. fell short once again. U.S. – China trade talks moved to Washington, D.C. for the next phase, with hopes that some kind of agreement might be announced relatively soon. Over the weekend, China’s hand strengthened, as the country reported a bigger-than-expected jump in its Purchasing Managers Index (PMI). Asian markets moved sharply higher on the news.

There continues to be a lot of talk about “late cycle” markets, but we are not so sure. True, the first quarter is likely to be light on both earnings and economic growth, but we believe this may represent a trough, with the global economy now showing signs of leveling off, and expectations for modest growth going forward.

Small caps led the way during the week with the Russell 2000 up 0.8%, and adding 14.2% for the quarter. Mid- and large- cap stocks were not far behind, up 14.0% and 13.6%, respectively for the quarter. In sectors, technology, real estate and industrials stocks finished the quarter strong. Outside the U.S., U.K. stocks were flat, returning 0.2% while emerging markets and China stocks were up between 1.2% and 1.6% for the week.

Volatility was throttled again this week, with the CBOE Volatility Index (VIX) falling below 14. In contrast, volatility expectations for bonds rose as bond prices continued to push higher. With yields on the 10-year U.S. Treasurys now at around 2.4%, down from 2.7% not long ago and 3.23% as recently as last November, some risk seems to have shifted to the bond market.

The Fed’s preferred inflation measure, the Personal Consumption Expenditures (PCE) Index, came out at 1.8% in January, a little lighter than expected, indicating that inflation remained muted, and supporting the Fed’s decision to hold off on raising rates for the time being.