You are at:Home»ETF Strategist Channel»Setting an Appropriate Target for Returns 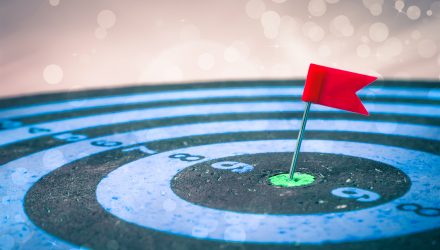 Setting an Appropriate Target for Returns

That said, in a flat or up market the hedge does act as a drag on performance.

The third element to the Defined Risk Strategy is the short-term, market-neutral premium collection trades. These are meant to be an additional source of return that is not dependent upon the overall direction of the market.

The impact is seen by overlaying the premium collection trades on top of the hedged equity position and is represented by the blue band below:

While the premium collection trades add a bit of uncertainty to the equation, more often than not, these trades have been a net positive to performance and have boosted the DRS’s returns above what would have been expected by just the hedged equity component alone.

However, there have been times when the income trades have been detrimental to the DRS’s performance.

The Target Return Band – Our Benchmark in a Myopic World

We believe the Target Return Band is the most appropriate shorter-term benchmark for the Defined Risk Strategy.

In any given year, it is our goal that returns of the DRS will be within or above the blue shaded area. In 19 of 20 years, they have been.

The one year where the DRS’s returns fell outside its expected return range was 2003. That year Swan stepped outside its normal investment philosophy and came into the year with the portfolio over-hedged, which exposed it to the risks of taking a directional bet on the market.

The Target Return Band drives our thinking when it comes to applying the DRS to other asset classes as well.

Investing in a Myopic Marketplace

It is our opinion that too much emphasis has been placed upon “beating the market”.

The short-termism or preoccupation with comparing performance against the S&P 500 on a yearly, monthly, quarterly and/or daily basis mirrors the myopic focus that many company analysts have on individual companies beating their quarterly earnings estimates. The inherent risk in such an approach is that one may start to lose the forest for the trees.

At Swan, our objective is to outperform over the full market cycle, rather than to ‘beat the market’ in any short-term period. We believe achieving returns within the targeted return band year after year can lead to long-term success.

Investors generally have goals that require years or even decades to accomplish. With such longer-term horizons, we believe the goals of an investor should mirror the goal of the DRS: to produce stable, consistent results. Since 1997, that is exactly what we have strived to achieve.

To learn more about Swan’s DRS investment approach, past performance, or how it may fit into a portfolio, please contact Swan at 970–382‑8901.