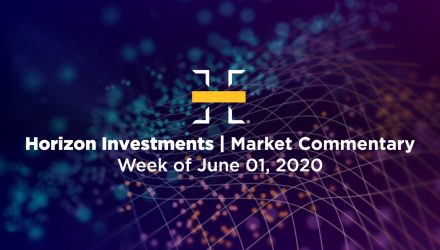 Sell in May and Go Away? Not This Year

Equity markets ended the month higher in a holiday-shortened week in the U.S. Regionally, international developed markets outperformed (MXEA +5.1%) while emerging markets returned 2.9% (MXEF). Domestic equities ended up 3.0% (SPX) for a May return of 4.5%.

It’s astounding that the S&P 500 is now down only 5% on the year and up almost 13% year-over-year [Figure 1]; it speaks to the massive fiscal and monetary efforts that have been put forth to support markets and economic activity. 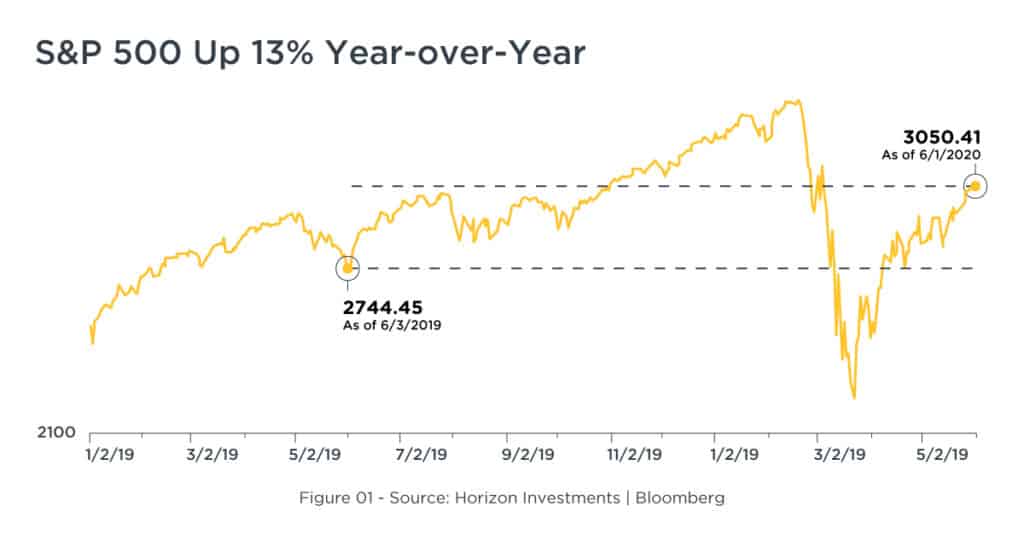 Realized volatility at the broad market level continues to decline, a positive sign. But beneath the surface, things aren’t so quiescent. Large-cap tech and momentum factor exposure experienced large anomalous moves lower last week, while beaten down value screamed, similar to price action we’ve seen headed into the end of the month for the past 3 months. We think this is likely just rebalancing and not a new trend. But given growth’s 18+% lead on value just this year, we’re becoming more mindful of the spread [Figure 2]. 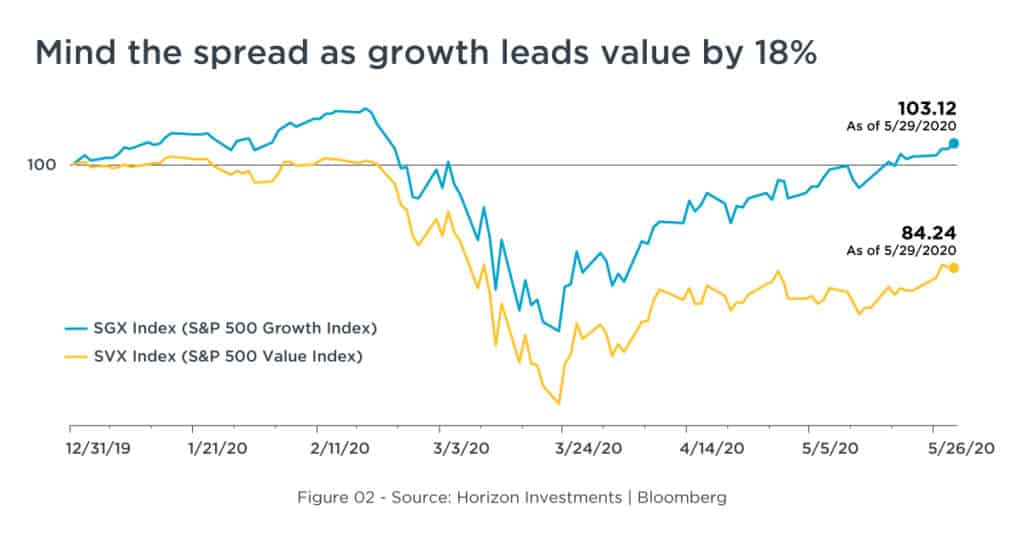 A proposal at the EU-level to begin sharing the fiscal burden of the coronavirus fallout among nations fueled investor optimism and led to an outperformance in European markets last week. It would be folly, however, to think any agreement among the 27 members will be reached quickly. This is likely to be negotiated in conjunction with the EU-wide budget, where massive disagreement already exists. The last time member states met on budgets was during a 28-hours long meeting in February. Japan also added to the excitement by announcing another large stimulus package, which led to a 7.3% gain in their main equity market (NKY).

There are signs U.S. stimulus is working too; continuing jobless claims fell for the first time since the start of the crisis. That means workers are being rehired. Coupled with the bonus stimulus checks — personal income actually rose in April by 10.5% — there is reason to hope the third quarter of 2020 will be strong. As we’ve said for a while, however, it will depend on the evolution of the virus. The politicization of the reopening process, likely to extend into the fall, also throws some caution to our optimism.

The yield curve steepened in relatively listless trading in government bonds. The 2-year and 10-year were flat, and the 30-year ended the week up 3.5 basis points (bps). Volatility has really declined in core bond markets and is likely to decline further. Numerous Fed members, including the Head of the New York Fed, the most important regional bank, have mentioned explicit caps on Treasury yields as a policy option. This would further reinforce guidance on low rates, dragging all rates down. We expect it to come this summer.

Credit markets continue to tighten, with Investment-grade credit spreads down 10 bps and high-yield spreads down 84 bps on the back of the optimism in equity markets. So far the massive issuance — IG YTD issuance passed $1 trillion USD last week, versus the $1.3 trillion issued on average over the past 5 years — has not weighed on spreads, but it has acted to steepen the yield curve.

The Fed announced details from its bond buying program, and the purchases continue to be miniscule, relatively speaking. The Fed is now buying about $4.5 billion in Treasuries per week, down from $75 billion per week in mid-March. And it’s only buying about $1.2 billion in credit per week. The IG market has received ~85% of the buying, while HY only made up 15%. Words, not actions, have caused the rally in credit, and especially high-yield.

Central banks, on the other hand, did take action. Last week three more central banks cut rates in what feels like the relentless pull of each country’s overnight rate to zero. And despite the aggressive actions of developed market central banks so far, more is coming. The market expects the ECB’s bond buying program to be upsized substantially at their meeting this Thursday. And Fed Chairman Powell indicated that the Main Street Lending Facility will be up and running soon. All of this should keep rates lower for longer.

In the back half of last week, equities faded as U.S.-China tensions simmered. We continued to observe the U.S. Dollar (USD) moving lower against most currencies last week with the notable exception of the Chinese yuan, a potential sign that the market most directly impacted by U.S.-China tensions is, in fact, paying attention. At President Trump’s press conference on Friday, called in response to the passage of the national security bill into Hong Kong’s Basic Law, not much new was announced. This is a short-term positive that could embolden President Xi to push key issues of national sovereignty in his backyard.

In fact, this Thursday will be the anniversary of the Tiananmen Square protests, typically observed by vigil in Hong Kong but canceled this year due to coronavirus-related health concerns. There is still potential, however, for unofficial demonstrations. This is arguably the most sensitive topic in mainland China and it could easily become a political flashpoint. Pay attention to this.

As the world over has seen these past few days, it’s all too easy for peaceful demonstrations to escalate. If an unofficial vigil or demonstration does take place and China cracks down, it could provoke response from the U.S. And with Xi’s takeover of Hong Kong being met with little more than an acknowledgement by Secretary Pompeo and President Trump that China is no longer two systems under one country, Xi likely feels emboldened to pursue territorial integrity with more vigor than before. While the market continues to shrug off rising U.S.-China tensions, this is definitely a situation worth watching closely.

The pullback in the economy was so extreme that the market has been generally willing to overlook minutiae in the data as long as the big picture or overarching trend points to progress. But the details will become more important over time as the recovery matures and we start to get a clearer picture of what’s happening (and what’s not).

How much is the economy improving?

For example, the economic data in March was bad. April was worse. Because that was expected, the market didn’t care too much. May looks to be better, relatively speaking. Even though U.S. PMIs are still in contraction territory, for example, they’re no longer at record lows. For now, “better than last month” is enough to keep the market moving into positive territory. But in the future, the market will start to care about these details and about differentiating speeds of recovery.

The bottom line is, markets tend to run pretty far ahead of where things actually are. We’re seeing that today. The big question now is, can we backfill the narrative and not get derailed by the new or unexpected (e.g., China tensions) in the meantime?

On Friday the monthly jobs report comes out. Expectations are in the very large range of down 2 million to down 12 million. Again, we don’t expect the market to make much of this, as long as the number doesn’t fall outside of expectations. But the number will become more meaningful (as it was prior to this crisis) in the future.

Global PMIs for May come out on Monday and Wednesday and are likely to show an upswing from April. Again, these numbers don’t matter quite as much now, as long as the trend is positive. But over time, as a more certain economic picture materializes, the market will start to differentiate the numbers more.

As we have been, we’ll continue to watch for improvement in coronavirus numbers across U.S. states, as well as for any new progress on the vaccine or treatment front. In terms of reopening, the extent to which the issue is becoming politicized is a bit worrying. If that trend continues, will political narratives increasingly impact reopening behavior? In other words, could we see unusually slow activity in some areas or increasingly risky behavior in others? We’ll be watching.