You are at:Home»ETF Strategist Channel»Perspective on GDP, Record Earnings Beats, and Real Rates Continue to Sink 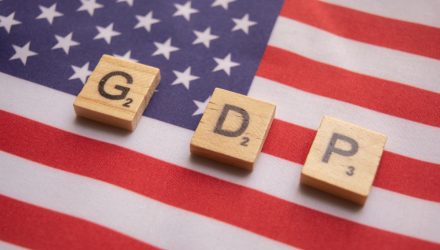 The 32.9% annualized hit to U.S. GDP may have cast a shadow over the end of last week, but a comparison to the Eurozone shows that we were relatively successful in blunting the economic damage. Government debt is soaring though and is set to climb higher when Congress comes to an agreement on the next round of stimulus funding… whether it includes another boost to unemployment payouts or not.

Meanwhile, while settling on earnings estimates has rarely been more challenging, it appears most analysts erred on the conservative side, leading to a record number of companies (more than 80%) coming in above estimates. The mega-caps and Big Tech are still dragging the S&P 500® Index and markets as a whole considerably higher than the average stock though. In fact, nearly two years to the day after becoming the world’s first $1 trillion publicly traded company, Apple is coming close to doubling that record-setting valuation. Talk about the big getting bigger!

Fireside Charts will be taking the rest of the week off, but we’ll be back with more market analysis on Monday 8/10.

1. U.S. lockdowns weren’t quite as severe as those imposed in many European countries.

2. Companies guided to a worst-case scenario, which didn’t come to fruition.

5. Incredibly strong pricing power on the iPhone has been a big contributor to Apple’s performance.

Fireside Charts will be taking the rest of the week off, but stay tuned to the blog tomorrow to hear Portfolio Manager Brendan Ryan appear on Wharton Business Radio’s Behind the Markets to discuss the insufficiency of the 60/40 portfolio, emerging short- and long-term market trends, and how BCM uses machine learning to pursue prudent risk taking in an era when it’s becoming more necessary than ever. In the meantime, follow us on LinkedIn for more content and information from BCM!

For More Insights from BCM:
Follow us on LinkedIn

Disclosure: The charts and info-graphics contained in this blog are typically based on data obtained from 3rd parties and are believed to be accurate. The commentary included is the opinion of the author and subject to change at any time. Any reference to specific securities or investments are for illustrative purposes only and are not intended as investment advice nor are a recommendation to take any action. Individual securities mentioned may be held in client accounts.