You are at:Home»ETF Strategist Channel»Ouch! Plunging Chinese Stocks Lag U.S. Equities by 32% in 2021 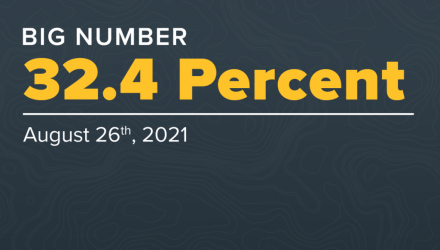 There’s a record-breaking chasm opening up between American and Chinese stocks this year.

The SPDR S&P 500 ETF (SPY) is outperforming large-cap Chinese stocks by 32.4%, as of August 24. It is, by far, the largest year-to-date performance gap in favor of the U.S. since the inception of the iShares China Large-Cap ETF (FXI) 17 years ago, according to Bloomberg data.

China’s Communist Party has not been kind to stock market investors in 2021. Their broad crackdown on businesses, especially online companies, has sent the FXI down nearly 12%. There’s also worries about the country’s economic growth as supply lines remain in knots and the rise of the Delta Covid variant risks more handcuffs on economic activity.

American stocks, in contrast, have been in a slow, steady rally to record highs. SPY is up 20.6% this year. (Related Big Number: Does It Make Sense to Invest in Stocks When They’re at Record Highs?)

It’s a stunning reversal from the early months of 2021 when Chinese stocks were beating U.S. equities by about 10% as shares of growth companies surged. At the start of the year, Covid cases were soaring in the U.S., while China was reopening more of its economy as it seemed to be past the worst of the pandemic. Lately, however, China has returned to using “draconian” lockdowns, reports Bloomberg News1, as it tries to achieve Covid zero, meaning quickly squelching a flare-up in order to stamp out cases. And that has slowed the Chinese economy in July, at a time when other countries are taking a different approach and trying to balance the spread of Covid against the economic impact of lockdowns.

The investment community – blindsided by the Communist Party’s broad regulatory crackdown – is debating whether China is uninvestable. Meaning, does the government’s sweeping intervention into such a large part of the economy signal that investors should abandon their Chinese holdings? Presumably those who are doubting their exposure to China had likely bought it believing the narrative that the country’s size and growth would eventually propel it past the United States in terms of GDP.

Horizon Investments doesn’t have a firm conclusion about whether China is uninvestable, however the investment narrative around China doesn’t appear to be living up to the hype over the last decade.

The disconnect is a cautionary tale for those who might be tempted to buy and hold an asset mainly because of the attractiveness of an investment narrative. (related Big Number: Does High-Flying Crypto Fit Into Goals-Based Investment Plans?)

Horizon Investments, as a goals-based investment manager (read our Redefining Risk paper to understand our goals-based philosophy), takes an active approach, utilizing a multi-disciplinary research process to screen the assets that make up its portfolios, especially its Accumulation strategies. Horizon’s tactical process seeks to capture equity investment opportunities with the aim of producing high, risk-adjusted returns.

As an example of Horizon’s flexible approach, the firm began this year with some of its Accumulation strategies having a meaningful exposure to emerging markets. However, as of our last strategy update on July 31, these same strategies had minimal exposure to emerging markets. (Related Big Number: the current strength of Corporate America’s profit machine)

Horizon consistently monitors markets and portfolios for new risks and attractive opportunities. At the moment, we do not believe emerging market equities, and China specifically, look favorable through our multi-disciplined investment process. Conditions can change on a dime, however; we are paying attention, so you don’t have to.