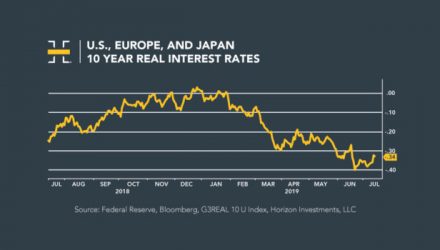 The year-to-date decline in the 10-year global real interest rate.*

Central banks around the world continue to provide monetary stimulus through easier financing conditions. Because real interest rates are adjusted for expected inflation, the “real” cost of borrowing in global bond markets is negative, which is supportive for economic growth and markets.

U.S. equity markets continued to rally following Federal Reserve Chairman Powell’s testimony to Congress, with the Dow Jones Industrial Average topping 27,000 for the first time. The Standard & Poor’s 500 closed the week above 3,000, another first. Yields on 10-year Treasuries rose, closing the week at 2.12%.

Global central banks appear to be moving back into synch as both the European Central Bank and the U.S. Federal Reserve indicate plans to keep rates low. Sunday night’s GDP numbers showed the Chinese economy at its slowest rate of growth since 1992, suggesting additional stimulus may be coming there as well.

Earnings season kicks off this week with the major banks reporting. U.S. retail sales are due out on Tuesday, an important number to watch as the economy has been largely driven by consumer spending, supported by a strong job market.