You are at:Home»ETF Strategist Channel»Markets Continue to Focus on Trade Issues 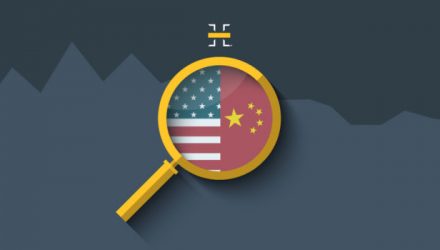 It was a week when politics tended to overshadow economics, with stocks selling off and U.S. Treasuries rallying. The S&P 500 declined for the third straight week, and other markets around the world retreated as well. Based on the rhetoric, the China trade situation appeared no closer to resolution, though all eyes remain on the June meeting of the G-20, when President Trump and Prime Minister Xi plan to talk.

On the positive side, jobless claims fell, and the U.S. Federal Reserve released its minutes on Wednesday with no plans to raise rates soon, but no indication it would be cutting rates, either. U.S. durable orders dropped 2.1% last month thanks to a slowdown in exports and a buildup in inventories. Still, the jobless rate remained at a 50-year low, wages are growing, and, in June the current run of positive GDP growth will pass that of the 1990s to become the longest on record.

In Britain, the ongoing failure to resolve Brexit finally led to the resignation of Prime Minister Theresa May and increased the possibility of a no-deal exit. Boris Johnson is said to be in the lead to replace her.

Data does suggest that global growth is slowing and that the ongoing trade tensions are starting to take a toll. Still, as The Wall Street Journal reported, investor confidence has held up and global fund manager expectations for future profits are at a nine-month high (according to a Bank of America survey).

While President Trump visited Japan, there was little in the way of major news on trade. China added incremental stimulus this past week. This week we will begin getting updated economic data out of China that should provide an opportunity to validate the effectiveness of the stimulus. Meanwhile, the Huawei news continued to drag on China & U.S. technology. Technicals are indicating a need to monitor risks closely.

Europe (MSCI Europe Index) outperformed on Friday, led up by Prime Minister Theresa May’s announcement that she would be stepping down.

Though stocks were up and down during the week, the CBOE Volatility Index (VIX) managed to end right where it started, at 16 and in line with its one-year average. The S&P 500 closed on Friday slightly up, and both U.S. and global stocks remain within 5% of their 52-week highs. Tech and semiconductor stocks remained under pressure, based in part on concerns over the prospects for China’s Huawei and tech trade generally with the S&P tech sector declining 2.8%. The energy sector lost 3.4% on the week.

Bond yields were down across the curve with long-term Treasuries the leading performer for the week. Riskier debt continued to sell off with high-yield credit leading fixed income markets lower. The equity yield space was led by international REITs +0.8%, with yields of around 3%. U.S. dividends trailed among equity yield, down as much as -1.1% with yields as high as 3.6%.

In the fixed income yield space, long-term Treasuries (+1.4%) led the way, while convertible bonds (-1.6%) were the worst performers for the third week in a row. High- yield bonds were also modestly down, -0.34% while most U.S. Treasuries, IG corporate bonds, and mortgages were at least slightly positive.

Inflation expectations followed rates lower with market prices for Treasury TIPS implying a 1.62% inflation rate over the next five years.