It was another slow week for markets as out-of-office replies pile up and volume plunges.  Equities put in another positive week with international developed markets outperforming strongly (MXEA +2.4%) while emerging markets lagged (MXEF +0.4%). Domestic equities landed in between the two. The S&P 500 notched a 0.6% (SPX) gain on the week to close less than 1% from its all-time high. 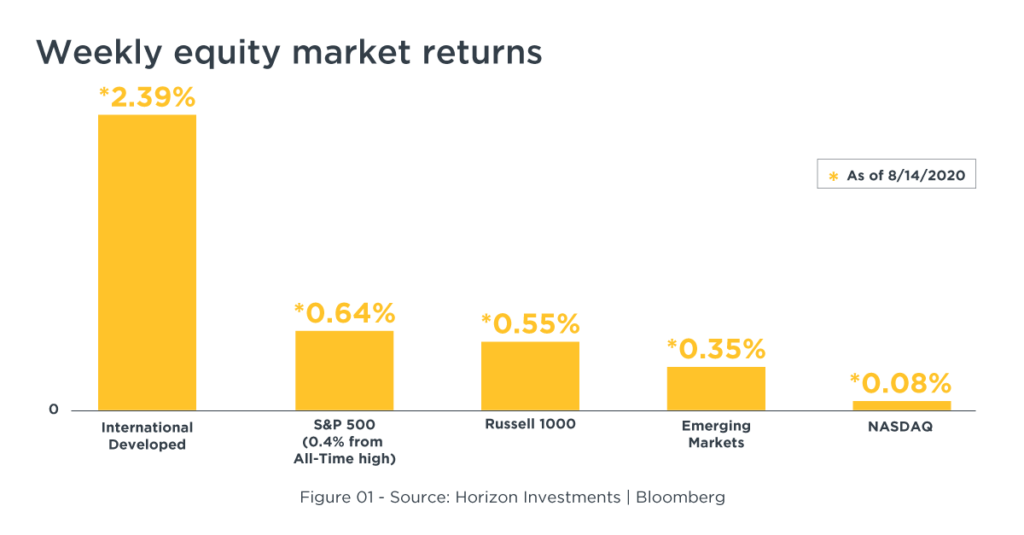 Tech-heavy  NASDAQ up almost 24% this year

It was another week of somewhat pro-cyclical price action, with value outperforming growth and large-cap tech lagging. We think getting too caught up in these shorter term trends is not terribly informative, especially when volumes and market interest are as light as they are right now.  Zooming out, growth is up ~300 bps on value this quarter and the tech-heavy NASDAQ is up almost 24% this year! 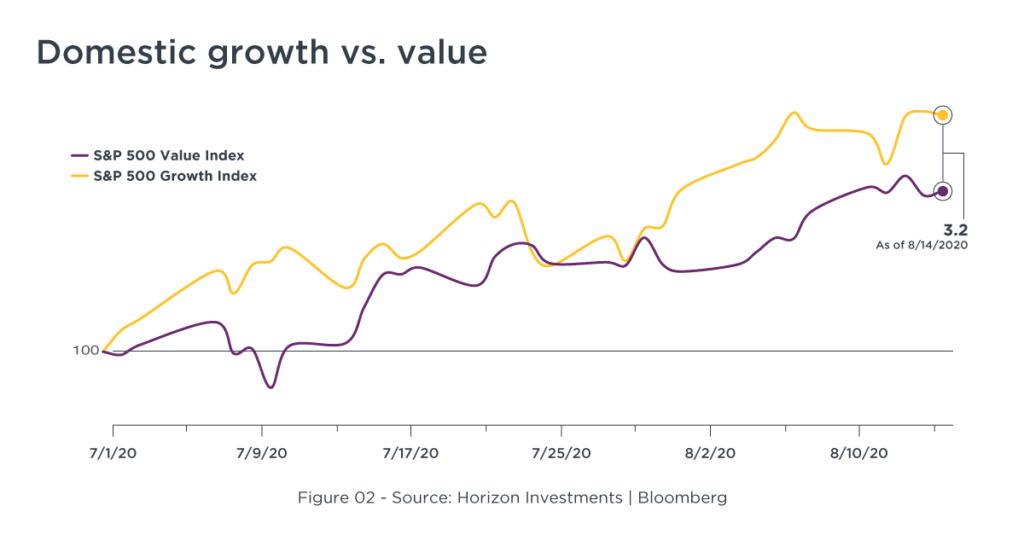 Politics continues to dominate market chatter. There were two big developments last week.  First, and most importantly for the here and now, Senator McConnell dismissed the Senate, signalling that stimulus talks are completely done for now.

While senators were told to prepare to return to Washington, D.C. with 24 hours notice, the next three weeks bring National Conventions and then the Labor Day holiday. The next stimulus bill looks like a September affair, perhaps coinciding with the budget negotiations due by the end of that month.

This will likely be a drag on the recovery, hurting spending by lower income households especially.  Indeed, last week’s retail sales report showed a higher total level of spending than in February, pre-COVID, a heavy portion of that due to the generous stimulus checks from D.C. that are not currently flowing to households.

Former Vice President Biden chose the junior senator from California, Kamala Harris, as his running mate. This was not a surprise, as she was leading in the betting markets. But it appears to signal Biden’s intention to run a middle of the road campaign. Still, it remains too early for markets to move substantially ahead of this coming election. We think the Labor Day holiday, or perhaps the first Presidential debate at the end of September, will be the dividing line.

Bonds anything but quiet last week

If equities were quiet last week, bonds, at least by recent standards, were anything but! Yields shot higher for the second week in a row. While the U.S. 2-year yield rose only 2 basis points (bps) — again, the Fed isn’t hiking anytime soon — the 10-year and 30-year yields rose 15 and 21 bps, respectively. That’s the biggest weekly increase in the 30-year yield since early June. 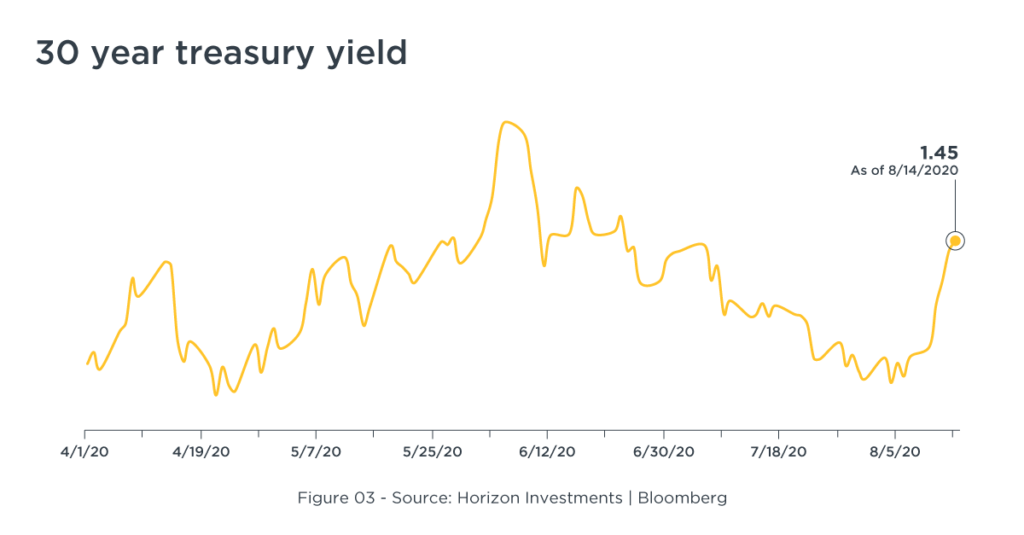 While that early June increase in interest rates was driven by reopening/reflation optimism, this recent price action is much more prosaic in nature. In our view, interest rates have backed up due to the massive issuance at the long-end of the yield curve coupled with the low liquidity of August. Thursday’s record 30-year auction — $26 billion in bonds — was sloppy and the curve may need to steepen further in the short term to digest the coming supply. But foreign demand remains strong, and U.S. rates are higher than other government yields across the globe.

Credit spreads widened, investment-grade (IG) up 3 bps and high-yield (HY) up 19 bps, which was a bit of a surprise given the positive equity market price action and general quiet issuance calendar.

Economic data has been broadly positive, although the pace of gains is clearly slowing. China versus U.S. retail sales, both reported last Friday, provides an interesting case study. In China, retail sales are still lower than they were a year ago, despite a strong COVID-19 response, while U.S. retail sales are at record highs. To us, that shows just how important the government transfer payments have been, and continue to be, to the U.S. recovery. 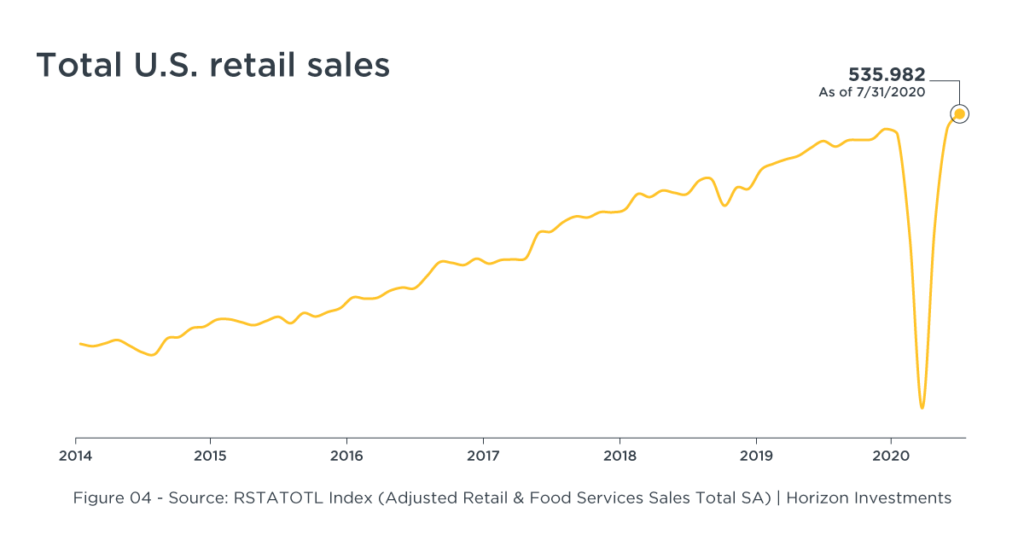 The recent trend in COVID cases in the U.S. is encouraging, and we are watching to see if consumer activity ticks up as a result.  High-frequency data remains the best, albeit flawed, way to get a handle on economic activity in this fast-moving environment.  While the U.S. appears to be doing better with the virus, cases are rising in Europe again – a reminder that declining case counts does not mean we are done with the coronavirus!

Housing has been a bright spot for the U.S. economy recently, and we will get data on building permits and housing starts, two forward looking measures of housing activity.  Given the deadlocked stimulus talks in Washington and general consumer caution on typical spending activities, it is important for growth for housing to continue to show strength.

The Federal Reserve releases their minutes from the last FOMC meeting on Wednesday.  Interest rate traders will be combing through for any signs of agreement around their policy framework review and plans for Fed bond purchases.  For the rest of us, just know that rates aren’t going higher any time soon!

PMIs are out on Friday. While production has rebounded, employment continues to lag. Seeing that tick up is going to be important to a sustainable recovery.

Politics have been dominating the public discourse of late and should continue to through the  election. We expect the polarization to continue — both sides feel they’re getting the better of this stimulus stalemate…for now!